A Day to Remember ( Akrotiri)

Since living in Crete I have discovered what a wonderful invention the computer is for keeping in touch not only with relatives and friends,but the rest of the world. Anything you need to know about, is there at the touch of a button.It was through this media that my friend Joy Valero who lives in the United States contacted me by e mail regarding a subject we both share,that of the Native American Indians. However, it is the archaeological site of Akrotiri  that my post is about today and I hope you will enjoy it.

You can imagine how delighted I was when my friend decided to come to visit us and we met in person for the first time in four years. Joy was staying with us for two weeks so my partner John and I had a few places in mind we wanted her to see even though she had her own itinery which included Akrotiri on the island of Santorini in Crete.

The approach to Akrotiri is a wonderful sight to behold .Click the picture above for larger view.

Akrotiri is identified as the best preserved prehistoric site and is therefor regarded as a crucial site because of that.At the end of the 17th century B.C., the volcanic Thera erupted,in what seems to be one of the biggest eruptions in the history of our planet. Under the volcanic remains,lay the city of Akrotiri. It is believed that the 30,000 inhabitants flew before the disaster occurred as no bodies were recovered. What was recovered however was extremely well preserved. Artifacts such as pottery and beautiful wall paintings were found. The volcanic eruption had been a disaster but at the same time a preserver.

When my friend and I arrived on Akrotiri we were absolutely stunned by the size of the archaeological site, we could not believe so much of the city had been discovered under all the debris from the Thera eruption. We were looking at most of the houses and other buildings almost complete except for their roofs, it was amazing. 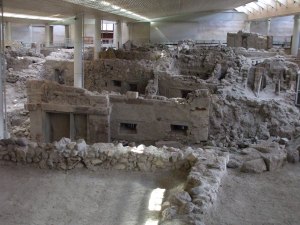 The site was first discovered in 1866,after another small volcanic eruption,and since 1967 excavations began then under Professor Spyridon Marinatos. Streets, public and private three floor high buildings and squares can be seen. In every house astonishingly well preserved wall paintings covering the interior of these buildings were found Wall paintings were found in public as well as private houses. Each home had its own drawings, which shows it is very likely that the subject painted was related to the people living in these houses at the time. For instance,a fisherman would have paintings related to his occupation and so on.

Much information concerning the lives and habits of the people can be drawn from the wall paintings alone. Most human figures represented are well dressed,with jewelry. Animal paintings were also evident. The Minoans impressionable Naval fleet was also depicted in many murals.

The Minoan frescoes discovered depict”Saffron Gatherers” who offer their crocus-stamens to a seated lady,perhaps a goddess; in another dwelling two antelopes painted with a flowing decorative,calligraphic line; the famous fresco of a fisherman with his strings of fish strung by their gills; 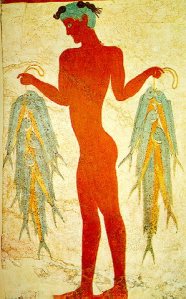 The flotilla of pleasure boats accompanied

by leaping dolphins,while ladies shade beneath the light canopies.

Here are a few more of these beautiful frescoes found in various rooms at the Akrotiri site. 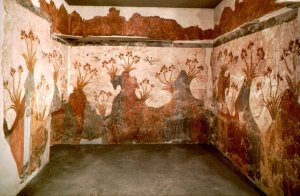 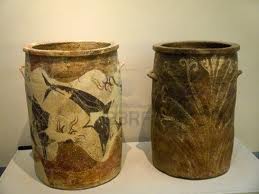 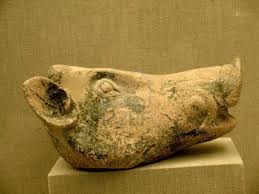 Close up of the Ladies Fresco

In the all important well organised West House, there were storerooms,workshops, a kitchen and a mill installation was discovered. The first floor was occupied by a spacious chamber which was used for weaving activities. A room for the storage mainly of clay vessels  was also uncovered. This room is where the fresco of the fishermen and the famous Flotilla freize was found. 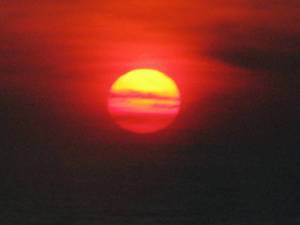 This photo was taken of the spectacular sunset over Santorini on our way home.

Obviously there is much more to this archaeological site than I can put here but I hope it will give some idea of the many hours, or should I say years put in by the team of archaeologists and conservationists enabling us to see the importance of Akrotiri. I myself, and my dear friend Joy were awe inspired and completely exhausted when we left Akrotiri,but what a day to remember.

Posted by ritaroberts on October 21, 2012 in Archaeological Digs