My previous two posts about ” Pottery in Archaeology ” covered the Neolithic period and the Bronze Age period In this post I will talk about the Iron Age Pottery found on various archaeologcal sites in Britain.

Please remember as previously stated that these posts are intended for the beginner interested in archaeology and wishing to study ancient pottery.

Archaeologists have found pottery sherds at almost all regions of Iron Age settlements around Britain and at this time pots were handmade from local clay and fired in bonfire kilns,or a shallow pit. The clay would have been mixed with ‘temper’ such as quartz sand, pellets, crushed burnt flint or fired clay (grog),even organic material like grasses. This helped to reduce shrinking and cracking of the pots when drying. The colour of the pot could be controlled by varying the amount of oxygen in the firing.People made different types of pots or decorated them in their own particular style in different parts of England so would not have been found on the same Iron Age settlement.

Iron Age people were not too particular about washing their vessels, which is why burnt remains of foods are found on the inside and sometimes the outside of the pot. The food was poured into a serving bowl for eating. Cooking pots were not usually decorated nor polished,whereas serving bowls could sometimes be decorated and were then polished by burnishing,this would be done by rubbing to achieve a glossy surface.The vessels produced during the Iron age consisted of ,jars ,bowls, beakers, cups and of course my favourite, the cooking pots.

A BRIEF HISTORY OF HOW IRON AGE PEOPLE LIVED.

Iron Age people were farmers who lived in round houses within an enclosure Wheat, barley and beans were harvested in small fields and people reared animals such as cattle,sheep and pigs.They collected wood for fuel and building houses,they preserved their meat with salt. Most Iron age people lived on farms or in small villages,occasionally they lived in larger settlements,such as hillforts. 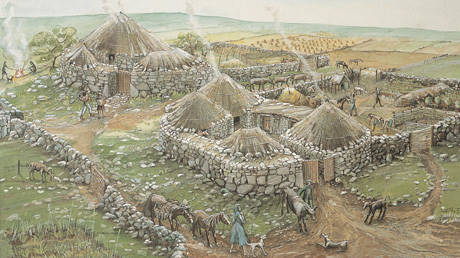 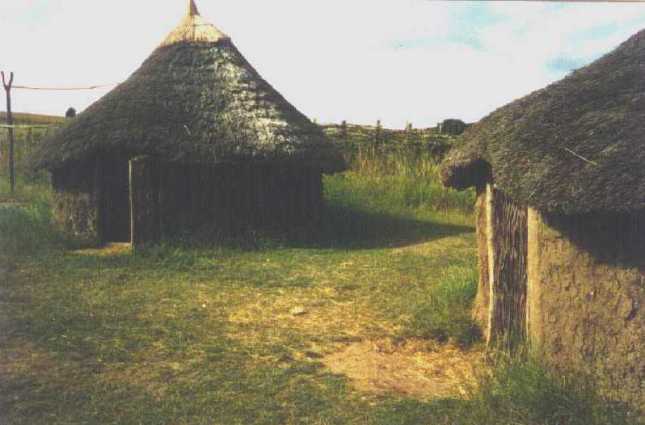 The most characteristic Iron Age feature in many parts of Europe are the Hillforts. Herefordshire has around forty hillforts which range in size from the Credenhill at forty nine acres down to small earthworks of just an acre or two. The hillforts in Shropshire vary in size from Badbury Ring which encloses just 2.5 acres and the massive Titterstone Clee hillfort which covers 71 acres and is one of the largest in Britain. These hillforts so named because they were built on the top of hills to take defensive advantage of the landscape.There are thought to be more than fifty Iron Age hillforts in Shropshire.

BLACK BURNISHED WARES. Were manufactured around Poole harbour by the (Durotriges) They first found their market in Dorset where they were contracted to supply the Roman Military on Hadrians Wall. During the mid 3rd century A.D. Black Burnished wares were abundent elsewere except for East Anglia and the North East. The Mid 4th Century contracts went to the South Midlands,South Wales and South West England

A selection of Black Burnished Wares. 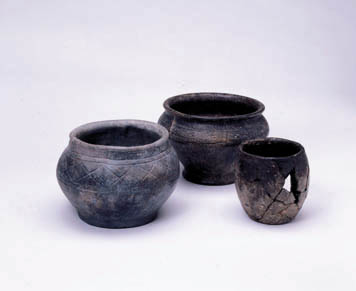 In this post I have included as many Iron age pottery vessel shapes as possible, which should enable the beginner to carry on his/her interest.

.A good start is to join an Archaeological or History group who usually carry out  field walking excersizes looking for broken pottery sherds.If you are lucky enough as I was some time ago to find a rim sherd  which led to my interest in ancient pottery, you can follow up your own research and discover whether the sherd belonged to a cooking pot, storage jar or bowl.  Good luck.

Look out for my next post on Pottery in Archaeology.

Posted by ritaroberts on January 12, 2013 in Archaeology and Pottery