RSS
← The Vindolanda Tablets ( A Brief Update )
Archaeology and Tintagel. →

The Queen of Trees.

The Olive tree is the only tree that grows almost exclusively here in the Mediterranean. Today the olive tree covers more than 10.8 million hectares of cultivated land around the world, of which 95% is in the Mediterranean region. One can see both wild and cultivated olive trees in this part of the world; they have more or less the same climatic requirements. Wild olives are found mainly in the lower altitudes- between sea level and 300m- along the shores of the  Aegean, the coast of southern Turkey, the maritime belt of Lebanon ,and Israel as far south as Mount Carmel. Greece is the now third worldwide for the production of table olives and olive oil however, the situation was different in Antiquity .

The oldest tree at Ano Vouves Crete is believed to be at least 2,000 to 3,000 years old. It still produces olives.

During the second millennium BC, Crete produced large quantities of High-quality olive oil, on an industrial scale; a valuable trading commodity of great economic importance, which the Minoans made well know to the rest of the Mediterranean, ultimately ,the world.

The olive tree described by the Roman writer Colmella  as the ‘The Queen of all Trees’, is very tough : with proper attention it can survive for centuries, sometimes for millennia. Even where the tree has suffered from disease, fire or frost , as long as part of the root structure remains intact, new shoots can emerge from the root or the bole that will regenerate the tree.

This extraordinary ability to survive and regenerate itself gave rise to the tree’s reputation for immortality . It became connected  with various legends in Antiquity. One story tells how the goddess Athena won from Poseidon the patronage of Attica with the gift of the olive to Athens. The olive was sacred to Athena appearing on the Athenian coinage, and it was a design used for the decoration of vessels and frescoes.

According to the ancient writer Pausanias, when the Persians set fire to Athens, the olive was burnt down ; but the very same day it grew again to the height of two cubits. Indeed olive shoots sprout readily from a stump. The great age of some existing olive trees suggests it is perfectly possible that the olive tree of the Acropolis goes back to a much earlier date than the classical period.

If we want to see the steady growth in importance of the olive throughout the Bronze Age, we need to study the actual remains of the plant themselves. This can best be done by using pollen  analysis . Oliver Rackham of Cambridge University and Jennifer Moody of the University of Texas at Austin show there was a substantial presence of olive trees on the west of Crete during the Late Neolithic , before the big take off in the Bronze Age (3000-2100 BC). From then onwards there are indications for large-scale olive cultivation.

Evidence of this comes from charred olive stones and pieces of charcoal retrieved from archaeological excavations at Myrtos,  Vasiliki, and the early levels at Knossos itself where Jane Renfrew studied the botanical remains.

The big expansion comes in the middle Bronze Age (2100-1700 BC ). This is the time when the sites at Knossos, Phaistos and Malia are becoming real palaces, and finds of olive stones and olive wood become more numerous. Further evidence comes from the Minoan towns at Kommos and Palaikastro in east Crete, and from rural sites at Chamalevri and Smari. But it is during the period of the palaces that the olive achieves its peak of production..In Crete, the olive becomes the prestige object par excellence, used by the rulers to demonstrate their power and wealth, and thus, inevitably, it was over produced.

According to Sir Arthur Evans, the first excavator of Knossos, in his seminal study The Palace of Minos, first published in 1935, the storage facilities at Knossos could hold more than 246,000l of olive oil. A good example of this is the conical cup full of complete olive fruit from a well at the palace of Kato Zakros- the smallest of the four main palaces in Crete.

Below An example of large Pithoi  from Knossos.

Olive oil was used in Prehistoric Crete in many different ways. First and foremost it was a component of the diet, though possibly to a lesser extent than today. It was also the base for cosmetics and beauty products, both as a cleanser and for perfumed oils and creams.

Organic residue analysis of the contents of pottery storage and cooking vessels shows traces of olive oil and aromatic oils from the Mycenaean and Minoan periods..

At the 2nd millennium site of Chamalevri in central Crete, for example, olive oil  was mixed with iris oil , honey and resin as has been recorded by Yiannis Tzedakis and Holley Martlew in their project entitled Minoans and Mycenaean’s: Flavours of their time, which focused on their residue analysis from vessels recovered in various excavations.

Below: Picture of Olive Press Installations from Vathypetro

Another major use of olive oil was for lighting. Clay lamps using wicks immersed in a flammable liquid were common objects in Early and Middle Minoan tombs on Crete. They are found also in settlements such as  Koumasa, Mochlos and Myrtos, In the Middle Minoan period stone as well as clay lamps began to be used throughout Crete,and from that time became a standard element of Minoan life. Almost every house of the period has produced at least one lamp-sometimes more. 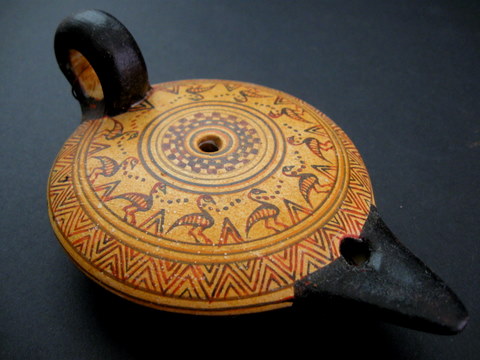 Posted by ritaroberts on April 1, 2013 in Uncategorized

← The Vindolanda Tablets ( A Brief Update )
Archaeology and Tintagel. →

3 responses to “The Queen of Trees.”