Imports of Chinese porcelain through the Dutch East India Company resulted in a large part of the early output of Delft potters being copies or imitations of Chinese wares. As at Nevers, blue-and-white wares were first outlined in purple or black. Often, too, the wares received a second glazing. The backs of plates and dishes, which had initially been covered only with a clear lead glaze, were now covered in lead-tin white. Although at first the Haarlem potters were content to incorporate decorative features of imported Chinese wares into what was otherwise an essentially Netherlands pattern ,by  the middle of the seventeenth century were remarkably accurate copies . For a century patterns of Chinese origin remained the predominant choice of the Delft potters, but from 164l they turned also to copying  Kakiemon  and Imari porcelains. 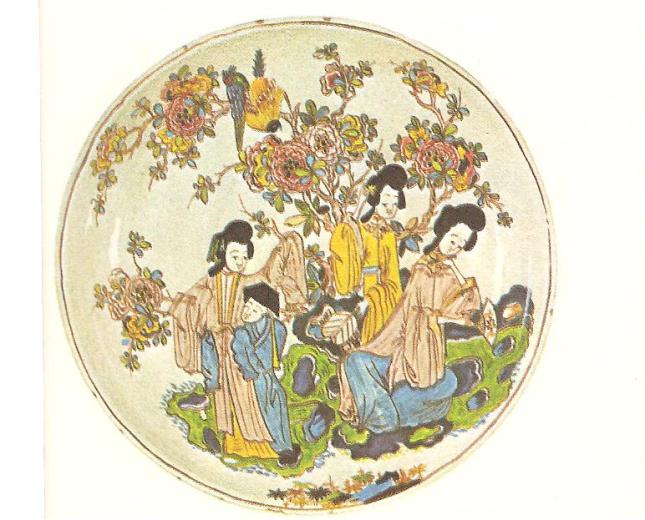 In l650 two Southwark  potters established a workshop at Brislington Nr Bristol and in about l665 the production of ‘defltware’ began at Lambeth, presumably by immigrant potters from Delft . In l683 Edward Ward of Brislington set up the Temple pottery at Bristol, and two years later the Burlington pottery was founded in New Jersey, U.S.A., presumably by other craftsmen from Brislington. By l700 two further workshops were established in Bristol. In view of the short intervals between the foundation of these potteries, it is hardly surprising that it is very difficult to distinguish between the wares produced in these centres, but the distinction between Delft and English ‘delft ‘ is more easily made. By the comparison the English wares are more clumsy although the range of motifs such as sketchy flower decorations and landscapes, derived from Delft, or direct copies of Chinese blue-and-white and famille verte porcelain – closely followed those of Delft itself. English delftware of this period has a rustic charm but lacks the sophistication of the Dutch.

Between the mid-seventeenth and opening decade of the eighteenth centuries Lambeth and Bristol potters made large decorative dishes known as blue dash chargers. (These are my favorite of the English delftware)

The term ‘blue dash ‘ derives from the habit of decorating the rim with a series of oblique strokes of blue. This motif comes ultimately from Chinese porcelain, although it is to be found on  Italian, and French faience. The dishes were provided with a flat footrim, which was commonly either bored or given a groove around its circumference for suspension. Many of these dishes bear portraits of the English kings and Queens from Charles l to Queen Anne often only recognizable by the royal insignia. More remarkable than these however, are large dishes painted in floral designs in blue, green, ochre and purple, which unlike the portrait dishes seem to owe nothing to contemporary wares in Western Europe. The flowers depicted are usually tulips or carnations. 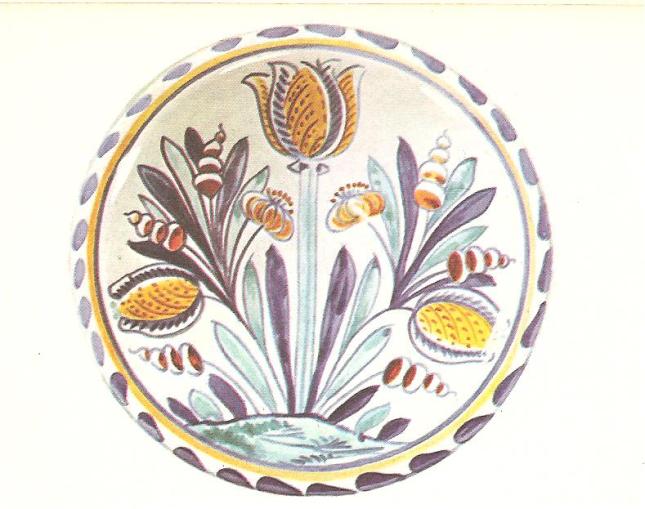 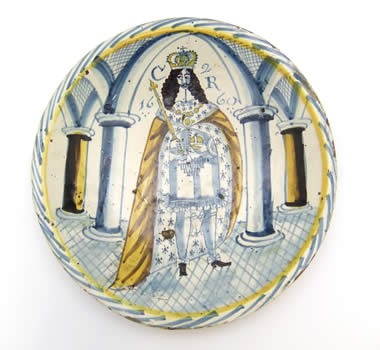 Delft type wares have a clay colored body which has been coated with an opaque, whitish (oxide of tin) glaze This glaze tends to chip at the edges, exposing the clay body. The Delft technique  was widely used on the continent, and in England was made at London (Lambeth and Southwark), Bristol, Dublin, Glasgow, Limerick, Liverpool and Wincanton, from the l7th century into the eighteen century, when it was out-moded by the new cream wares. 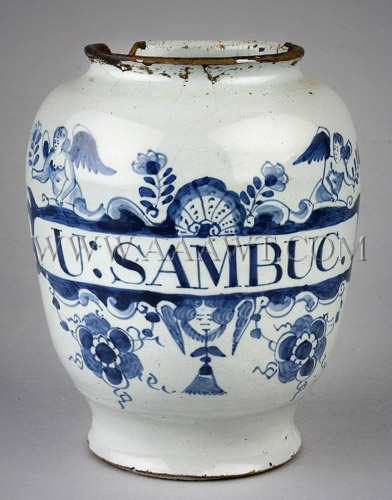 Blue Delft markings appear on the underside of the piece and consist of some common elements. Early pieces feature a large V’ with a C’ on the upper right. 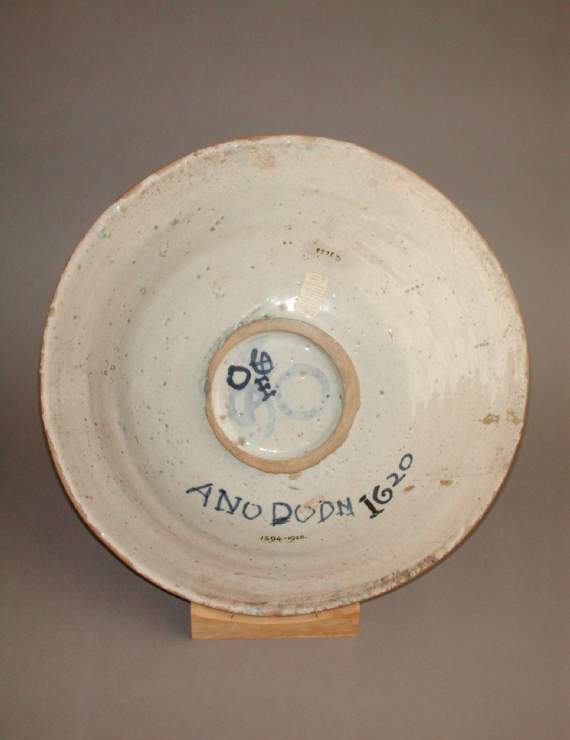 A Delft dish. Courtesy of the Fitzwilliam Museum Another example of Delft marking. 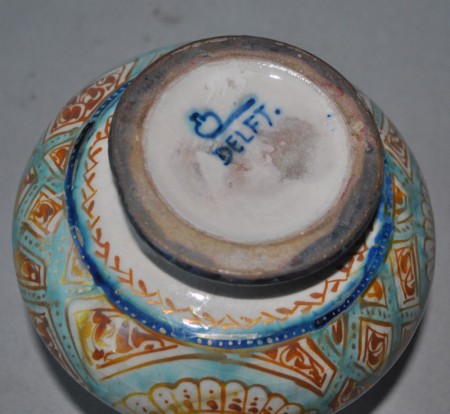 These are the only examples of Delft ware marks I could find.  If you are interested in Delft Pottery maybe you could do some further research yourself and if you are also interested to collect this really lovely pottery good luck.

Posted by ritaroberts on June 20, 2013 in Antiques