The all Important Phaistos Disc

The Phaistos disc was discovered in l908 by the Italian archaeologist Luigi Pernier in the Minoan pre-formed hieroglyphic “seals” into a disc of soft clay, in a clockwise sequence spiraling towards the disc’s center.

The Phaistos disc captured the imagination of amateur and professional archaeologists, and many attempts have been made to decipher the code behind the disc’s signs. While it is not clear that it is a script, most attempted decipherments  assume that it is; most additionally assume a syllabary , others an alphabet or logography.

Attempts at decipherment  are generally thought to be unlikely to succeed unless more examples of the signs are discovered, as it is generally agreed that there is not enough context available for a meaningful analysis. However more news has come to light recently with regard to the decipherment of The Phaistos Disc.

Close-up section of the Phaistos Disc.

HAS THE PHAISTOS DISC DECIPHERMENT BEEN CRACKED

The deciphering of the Phaistos Disc has puzzled specialists for over a century, however new findings describe the disc as the ” first Minoan CD- ROM ”  featuring a prayer to a mother, says Gareth Owens, Erasmus coordinator  at the  Technological  Educational Institute, speaking at the TEI of Western Macedonia  on Monday, said the disc is dedicated to a “mother”

“The most stable word and value is ‘mother’, and in particular the mother goddess of the Minoan era, ” said Dr.Owens. He says there is one complex of signs found in three parts of one side of the disc spelling l -QE – KU – RJA, with l-QE meaning ‘”great lady of importance” while a key word appears to be AKKA or “pregnant mother”,  according to the researcher. One side is devoted to a pregnant woman and the other to a woman giving birth.

The Phaistos disc was discovered in the Minoan palace-site of Phaistos ,near Hagia Triada, on the south coast of Crete; specifically the disc was found in the basement of room 8 in building 101 of a group of buildings to the north east of the main palace. This grouping of four rooms also served as a formal entry into the palace complex. Italian archaeologist  Luigi Pernier recovered this remarkable intact ” dish,”  about 15 cm in diameter and uniformly slightly more than one centimeter in thickness, on July 3rd 1908 during his excavation of the first Minoan palace. It was found in the main cell of an underground ” temple depository”. These basement cells, only accessible from above, were neatly covered with a layer of fine plaster. There content was poor  in precious artifacts but rich in black earth and ashes, mixed with burnt bovine bones.

In the northern part of the main cell, in  the same black layer, a few inches south-east of the disc and about twenty inches above the floor, Linear A tablet PH-1 was also found. The site apparently collapsed  as a result of an earthquake, possibly linked with the explosive eruption of the Santorini volcano  that affected large parts of the Mediterranean region in mid second millennium BC.

Posted by ritaroberts on October 31, 2014 in Uncategorized

A touching dedication to a brave man from Richard Vallance Janke

Posted by ritaroberts on October 29, 2014 in Uncategorized

Evidence of The Past

Re-blogged from my Archaeology Archives.

The Town of Worcestershire in England is one of my favourite places, not only because of its history but because I spent many years working alongside archaeologists and specialists in their own field, such as those working on flint,old coins, bones, metalwork ,jewelry, fabrics,stone tools,pottery and many more items which are found on archaeological sites, helping us to reconstruct our past.

The history of Worcester goes back as far as Paleolithic times where 125,000 years ago hippo’s lions and elephants would have been a common site in the county. Early settlers used tools made of flint and other stone. Most of the Paleolithic tools from Worcestershire have been found in quarries along the terraces of the River Avon. These include handaxes and others made from flint and stone,the remains of animals and plants from the time have also been found.

Posted by ritaroberts on October 27, 2014 in Uncategorized

Show and Tell (Linear B ) by Rita Roberts

The Grand Palace of Mycenae in Crete was the Kingdom of Mythical Agamemnon, first sung by Homer in his epics and is one of the most important and richest Palatial centers of the late Bronze Age in Greece. Its name was given to one of the greatest civilizations of Greek pre-history.

One of the Grave circles discovered at Mycenae

The great Lion Gate to Mycenae

When this site was excavated many gold artifacts were found among them the gold cup with relief decoration depicting a scene with a bull.

MY LINEAR B TRANSLATION FOR GOLD CUP

Posted by ritaroberts on October 26, 2014 in Uncategorized

The Saqqara tomb of the New Kingdom official Maya and his wife, Meryt (Source: Saqqara.nl).

The Tuesday Tomb returns as a fortnightly feature with the tomb of Maya and Meryt. The Saqqara tomb was the first Egyptian tomb that I ever entered and it is one of my personal favourites. 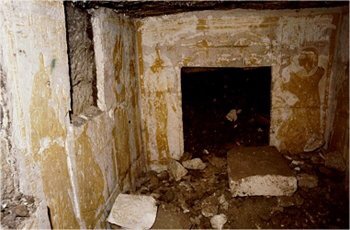 The interior of the tomb (Source: Saqqara.nl).

Maya was Overseer of the Treasury and Overseer of Works during the reign of Tutankhamun in the Eighteenth Dynasty. He is also known to have served under the General Horemheb when he became pharaoh. He died in Year 9 of Horemheb’s reign and his wife, Meryt, was already deceased by this time. They were buried together in a tomb close to that of Horemheb in Saqqara.

The tomb was partially excavated by the archaeologist Karl Richard Lepsius in 1843 but was eventually covered by sand and lost again. The tomb was re-discovered in 1986…

Posted by ritaroberts on October 21, 2014 in Uncategorized

Generously retweet from fellow researchers and aficionados of ancient Greece and watch what happens!

Posted by ritaroberts on October 19, 2014 in Uncategorized

Posted by ritaroberts on October 19, 2014 in Uncategorized

Amphipolis mosaic is abduction of Persephone

Amphipolis mosaic is abduction of Persephone.

Posted by ritaroberts on October 18, 2014 in Uncategorized

The main reason for pursuing archaeology is to find out as much as possible about how remote societies lived.

The desire to discover can take many different forms, depending on of course on a persons knowledge. Archaeology can answer many of these questions especially in the case of good preservation, for instance when bodies are found such as those discovered in peat bogs, often gives a good idea of what people actually looked like in previous times. People buried in peat  bogs were exceptionally well preserved such as the case of Iron Age Tollund Man from Central Jutland.

The Tollund Man as he appears today.

The ruins of houses and peoples possessions  when found give an idea of their lifestyle, also their tools can show what work they did. Archaeology is about digging it up and writing it down and there are many spin-offs to choose from to study. For instance some people prefer to study ancient flint implements, another may choose bones whereas another environmental studies. In my case I chose ancient pottery from the Iron Age and Roman to the Medieval periods. All these are classed as finds from any given archaeological site

The majority of finds consist of objects or more often fragments of objects that have been lost, thrown away or deliberately buried. However, these may not be human made objects since finds include items such as animal bones and insect remains. Rubbish from a household was often buried in pits and would have included worn out broken objects as well as food debris such as animal bones and oyster shells, oysters were a delicacy in Roman times.  Discarded fragment objects are the most common type of find on archaeological sites,therefor it is the rubbish from the past which provides most information about the site and the people who used it.

Excavated finds are given an identification code number to record the layers in which they were found. Most finds are sufficiently strong enough to withstand washing in clean cold water with brushes such as, tooth brushes, then left to dry. However other more fragile objects such as wood, leather or metal objects or fragments from garments require laboratory conservation to prevent further decay. Building material like floor and wall tiles, fragments of mosaic floors ,broken window glass etc., all provide information about the site, giving clues as to what a roof may have looked like on a Roman Villa.

An example of Archaeological Stratigraphy (layers)

Many aspects of an archaeological site, including dating are revealed by its finds with those discovered elsewhere and it is often the most common finds such as shards of pottery that prove the most useful for dating a site. Seeing as the pottery is my chosen study I will proceed by explaining more on this subject.

With shards of pottery, groups are made initially according to the colour of the pottery and any other indicators,  such as the way the surface of the pot is finished, any distinctive  lines  ,inclusions  in the clay such as quartz or rock fragments, as an example, small fragments of malvernian  rock would indicate the pot came from the Malvern region in England.

These fragments are then sub-divided by sorting shards into rims, from the top of the pot, base shards from the bottom of the pot and handles and body shards from other parts of the pot.

All this examination of the pottery is done mostly by eye but sometimes a hand lens or microscope is needed. Next a detailed examination and cataloguing of each fragment of the pottery is carried out and a record is made of details observed such as, where on the site a shard or shards were found, its colour and fabric type and decoration if any. Sometimes shards will be selected for illustration for a report ready for publication. Any joins would be looked for which may seem to go together as such joins will add significantly to the evidence. When the pot has been identified and dated the specialist points out the parallels which have been used.

Two Shards of Iron Age Pot. The close up show rock inclusions which are Malvernian Rock Indicating that this pottery came from the Malvern Hills area in England and was hand made.

Once the cataloguing is written the specialist calculates the quantaties of each type of pottery that has come from each archaeological layer.

All this detailing and cataloguing  of the pottery and a written report forms part of the archive for the excavation, after which the specialist produces a report for publication. The same basic approach of identification, sorting, grouping, quantification, comparison examples from elsewhere and conclusions from the evidence is used in the study of most finds and environmental samples.

Posted by ritaroberts on October 15, 2014 in Archaeology

Posted by ritaroberts on October 15, 2014 in Uncategorized