RSS
← 2 great photos of the tiny Linear B tablets at the Heraklion Museum, taken by my colleague and fellow Linear B researcher, Rita Roberts
The Minoans and their Leisure Time. →

An Update on my Linear B Study

For those who have been following my interest in the Linear B Ancient Script writings, here is an update which includes my visit to The Heraklion Archaeological Museum in Crete. Here I was fortunate enough to see a wonderful display of some of the Linear B clay tablets which Sir Arthur Evans had discovered at Knossos Palace.  I could not believe my eyes when I saw how small these tablets were, and stood in amazement trying to imagine how the scribes managed to convey all the meanings of which they wrote on these tablets, which incidentally,  were not fired when they were initially made, just placed out in the sun to  dry.  Many of the tablets when found had evidence of being burned which has helped preserve them giving us an insight into a lost civilization. This for me was the attraction of learning the Minoan Scripts. It is from these Linear B writings we learn their way of life.  And I might add, it is thanks to my teacher Richard Vallance  who has helped me to achieve the learning of this fascinating subject far enough to be able to read most of the tablets I was looking at. However , Richard has informed me that he has to be a little tougher with my lessons now as they will get  more difficult the further into the study. so I hope my fellow bloggers will excuse the fact that my posts may be fewer than usual.

You can click on all the photo’s to ENLARGE.

I love this one. Its so clear. and I can write it all.  And lastly a photo of me at the Heraklion Archaeological Museum 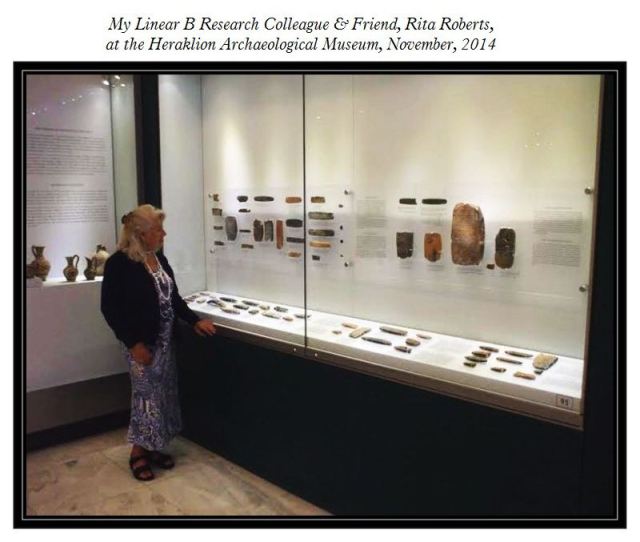 Thanks to you all for your support in reading my Linear B posts.

Posted by ritaroberts on November 30, 2014 in Uncategorized

← 2 great photos of the tiny Linear B tablets at the Heraklion Museum, taken by my colleague and fellow Linear B researcher, Rita Roberts
The Minoans and their Leisure Time. →

8 responses to “An Update on my Linear B Study”