While exploring the remains of a late 12th century building within the former medieval town defences, archaeologists from MOLA Northampton found two gaming pieces carved from antler, interpreted as a king or queen and a bishop. Both were incomplete, having been discarded during manufacturing-but, Senior project manager Andy Chapman suggests, the discovery of large amounts of sawn offcuts from red and fallow deer antlers in the same deposits points to the presence of a nearby workshop producing pieces very much like these. Most of the dumped material lay near the postholes of a timber-framed building that could represent the workshop itself. If so, the structure would be the first such site to be identified in this country.

The game of chess came to Europe from the East- through contact with the Arab world-and by the 12th century it was becoming a popular game at the upper levels of European society,’ said Andy. ” The finest pieces were elaborately decorated, fashioned in ivory and usually figurative , such as the famouse chessmen found on the Isle of Lewis, Scotland. To supply the wider market however, smaller pieces were made from antler of animal bone , often decorated with patterns of ring and dot motifs with incised lines encircling the base and running over the top. These simple chess pieces followed basic Arabian styles, where anthropomorphic  designs were prohibited. But in Europe  simple figurative elements such as heads, often with ring- and- dot eyes were added.

Around 70 of these stylized pieces are known in Britain, mostly appearing  individually as stray finds during excavations at high-status sites, such as castles , abbeys, rural manor houses or important town houses. The Northampton pieces are also decorated in this way.: one measuring about 2.5cm tall, roughly depicts a human head with a rudimentary  face consisting of ring- and -dot eyes on either side of an angled nose. Its flat top had been cross-cut to form a simple crown, and the pieces tapering lower half would have been inserted into a larger cylindrical body to form a king or queen. As for why the piece was discarded, it seems that, while carving the right side of the face, the craftsman had accidentally exposed the antlers spongy core ,making it impossible to set a ring-and-dot eye in the correct place- although a misplaced eye, too low and to close to the nose., was added, perhaps in a failed attempt to salvage the piece.

The other piece was carved as a taller cylindrical object some 4.2cm high, whose front had been cut to form a pair of simple rectangular heads- the classis design of a bishop, which in Europe was replaced the Arab vizier. One of the heads is broader than the other, however, perhaps because a sliver of antler broke away during manufacturing- which may explain why the piece was discarded.

Chess pieces from Angel Street Northampton. Kings head left about l inch long and up to half an inch in diameter.

Although a medium-sized provincial town, Northampton was a major power at the time the chess pieces were being made. Its Royal castle hosted several parliaments between the mid 12th and late 14th centuries as well as the trial of Thomas Becket, Archbishop of Canterbury, in 1164. This prestigious  context may have created a market for elite goods,such as chessmen, and could explain the flourishing of a local cottage industry to meet this demand.

Here are some pictures of the famouse Isle of Lewis Chessmen.

A Queen and King from part of the Medieval Lewis Chess sets. 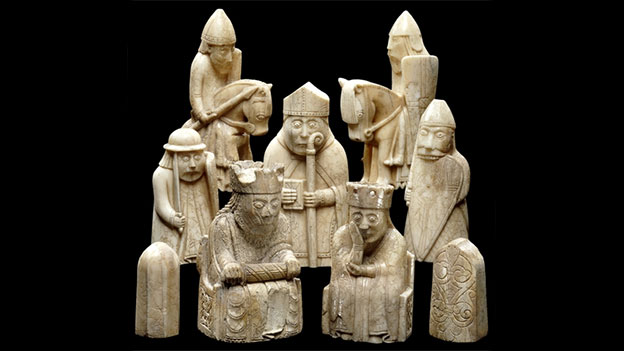 These famous Lewis chess pieces are made from Walrus tusks and whale teeth.They can be seen in The British Museum room 40

Lewis chess set on the board.

Posted by ritaroberts on July 12, 2015 in Uncategorized