The Legend and Lore of Plants Part 2

For those of you interested here is the second part of The Legend and Lore of plants.

HISTORY OF THE IRIS

The name iris is the Greek word for the rainbow. To the Greeks the rainbow was personified in the beautiful,swift footed goddess Iris, Zeus and Hera’s messenger, whose path between heaven and earth was the rainbow.

The Greeks planted irises on woman’s graves, for Iris was said to lead the souls of women to the Elysian Fields. The iris prized for its medicinal value in antiquity and the Middle Ages, was used medicinally as early as about  1540 B.C. during the reign of the Egyptian pharaoh Tutmosis 1, who had the iris depicted on the walls of the temple of Theban Ammon at Karnak To the ancient Egyptians the iris was also a symbol of life and resurrection and was associated with their god Osiris and his son Horus. Osiris was the first legendary pharaoh who was killed and was then made immortal. After his death his earthly duties were transferred to Horus, who later also acquired powers of regeneration. A stylized iris appears on the brows of Egyptian sphinx statues, which was said to be representations of Horus. 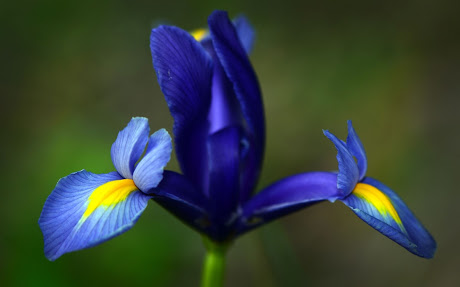 The iris is thought to be the source of the fleur-de-lis symbol which has been used since antiquity but is best known for its associations with French kings. since the word fleur-de-lis in French means ” flower of lily,” The lily also has been named as the model for this symbol; but the iris in its actual appearance  and its history has a better claim of this title. Tradition has it that the first French ruler linked with the fleur-de-lis symbol was Clovis  1 (466-511 A.D.  who founded the Merovingian dynasty of Frankish  kings. There are at least five different legends that purport to explain why Clovis chose the symbol. One is that he wished to commemorate the iris because his men had fashioned  victory wreaths for themselves out of irises after the battle of Tolbiac (496 A.D. 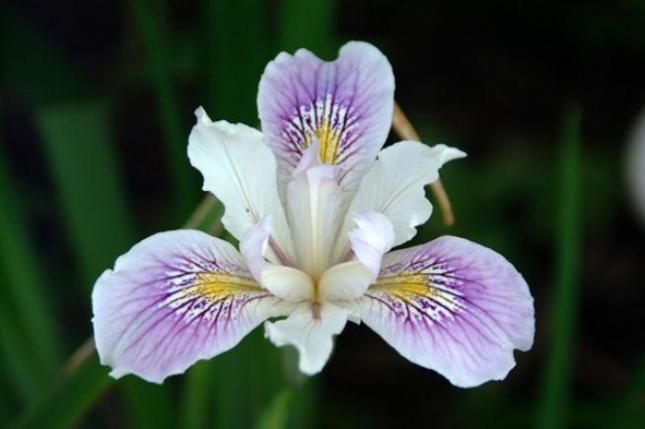 The first historically  documented use of the fleur-de-lis by a French king was when Louis V11 chose it for his banner in the second crusade (1150 After that time both the symbol and the iris flower were called fleur-de-Louis (flower of Louis) which eventually was modified to fleur de luce, then fleur-de-lis.  Until the eighteenth century the iris had this name in France. In 1376 Charles V of France adopted three golden fleurs-de-lis on a blue field as the official coat of arms of France. The design remained the emblem of the monarchy until the French Revolution.

The sweet smelling iris root and white iris was used in the Middle Ages and antiquity in making cosmetics and perfumes and last but not least Because  many iris roots resemble a seated figure they have been used for voodoo dolls in the West Indies.

Posted by ritaroberts on April 29, 2016 in Uncategorized

The Legend and Lore of Plants.

Many plants have a rich history of fact,folklore, symbolism and mythology that often dates back thousands of years. Generally, the plants that have the most lore connected with them are those which were most useful to man as food, medicine, or commercial products of those which impressed him with special characteristics such as striking size, beauty, or longevity. But plant folklore symbols  and myths also represent men’s efforts- ranging from naïve to sophisticated – to fulfill basic human psychological  needs, especially the need to explain the unknown.

As modern, 20th century folk  we may be tempted to react with amused condescention toward these stories, but in the wholesale discarding of old beliefs we may also run the risk of losing more than we gain. Both the tenacity and the symbolic richness of legendary  stories suggest that they have a psychological  validity that survives even when we can no longer believe them literally .

With so much  still left to discover about the mind and world of man, we can hardly afford to throw away anything we may already have learned. But even aside from such weighty  considerations both fact and fiction in plant history make interesting reading in themselves. By providing a glimpse into the past, they let us see even the most familier of plants around us in a new light.  The dandelion in your lawn or the parsley on your plate may never be the same again.

THE HISTORY OF GARLIC.

Garlic has a long history as a food plant.  In Egypt several thousand years before Christ, garlic was given for strength and nourishment to the laborers  who built the pyramids. The bible records that the Israelites who lived in Egypt at the time of Moses also ate garlic before their exodus out of that country. Like the Egyptians, the Romans gave garlic to their laborers and their soldiers ate it in the belief that it inspired courage. Thus it was dedicated to Mars, the Roman god of war.

Garlic has also been valued for its medicinal and antiseptic values. Garlic has seen use since ancient times in the West and the Orient as an antiseptic medicine against the plague and for many other ailments besides. Even today in rural New Mexico, garlic is worn strung on a necklace to preserve against infection from diphtheria.   Because of its strong odor and antiseptic properties, seventeenth century sailors  used it in cooking their stale and rotting food supplies, especially their meats.

Since the ancients believed that many diseases were the result of evil spells, garlic with its effective medicinal qualities was thought to possess magical power over evil; thus it was used in many charms or countercharms.  In Greek legend, Odysseus used moly, a wild garlic, as a charm to keep the sorceress Circo from turning him into a pig.

In the Middle Ages, garlic was considered strong against the evil eye, witches and demons. Another tradition  still held in rural New Mexico is the use of garlic as a charm to help a young girl rid herself of an unwanted boyfriend. She would first put a piece of garlic and two crossed pins in a spot where two roads intersect, and then she must get the boy to walk over the charm without noticing it. If the task is accomplished successfully, the boy will miraculously lose all interest in her.         ( Personally I think the smell of garlic would put him off anyway)   I will follow with another interesting piece of history about  Ginseng.

The name Ginseng is derived from the Chinese words for  ” likeness of man ” because its roots sometimes resemble a human figure. (The Chinese consider such roots to be the most efficacious medicinally and will pay high prices for them). Ginseng’s genus name Panax, like the word panacea, comes from the Greek word panakeia, meaning   “all healing” .This refers to the plant’s reputation as a Chinese cureall – a reputation it has enjoyed for thousands of years.

To the Chinese, ginseng is a tangible link between man and the unseen spiritual reality on which existence is based: they believe that the gensing plant contains an embodiment of the great spirit of the universe. When a ginseng hunter finds the plant growing wild, he will first kneel in prayer, claiming that his soul is pure and asking that the great spirit remain in the plant. Its efficacy thus assured, he digs up the root and takes it home – probably for his own use rather than for the herb market, since wild specimens are very rare. Most ginseng used for medicinal purposes is cultivated, some of it in the United Sates.  In the early 1900’s ginseng was one of the nations chief moneymaking export crops; and most of the ginseng grown in the U.S. today is still exported.

It is a custom to have oral thick paste in the start of winter for the people of Suzhou. In ancient times, the rich family would use red ginseng, dried logan and walnuts to make a soup which had the effects of nourishing vitality and invigorating of blood and supporting the yang.

NOTE:  There will be more on the Legends and Lore of plants in further posts.

Posted by ritaroberts on April 25, 2016 in Uncategorized

‘It was miraculous’: The moment when conservators found John the Baptist in Shakespeare’s Schoolroom | Culture24

Leading Art Conservator Mark Perry was stunned to find the figure of John the Baptist in a medieval wall painting at Shakespeare’s Schoolroom, which will open to the public on Shakespeare’s birthday.

Source: ‘It was miraculous’: The moment when conservators found John the Baptist in Shakespeare’s Schoolroom | Culture24

Posted by ritaroberts on April 21, 2016 in Uncategorized

Posted by ritaroberts on April 19, 2016 in Uncategorized

Bcharré And Her Tree of Kings – also on AUDIO

Bcharré  And Her Tree of Kings … There we stood above Bcharré the land of our fathers in the shadow of a magnificent tree of kings, scarred and riven, beyond which stretched the Qadesh…

Source: Bcharré And Her Tree of Kings – also on AUDIO

Posted by ritaroberts on April 19, 2016 in Uncategorized

Fashion on the Ration: The story of clothing on the home front during World War Two | Culture24

This is a completely different post to my usual.  I remember my mother wearing these clothes during World War two.

Source: Fashion on the Ration: The story of clothing on the home front during World War Two | Culture24

Posted by ritaroberts on April 14, 2016 in Uncategorized

Posted by ritaroberts on April 14, 2016 in Uncategorized

To my fellow bloggers who have been following my study of Mycenaean Linear B.  This article written by my teacher Richard Vallance Janke has been puiblished in the Archaeology and Science magazine and I am proud to say that one of my translations has also been added to the article which is in the first chapter. Please read further to see all the work which Richard has put into this article enabling other linguists to benefit from his work.

Posted by ritaroberts on April 11, 2016 in Uncategorized

The route taken by Hannibal over the Alps to invade Italy has been a matter of debate for 2,000 years, but scientists may now have the answer — thank

Posted by ritaroberts on April 11, 2016 in Uncategorized

Posted by ritaroberts on April 5, 2016 in Uncategorized