Posted by ritaroberts on June 29, 2016 in Uncategorized

ARMIES OF THE SUCCESSORS: THE ANTIGONIDS

(This is the first part in a series on the militaries of the Macedonian Successor states; which grew out of the Wars of the Diadoci that followed the death of Alexander the Great. For the next cent…

Source: ARMIES OF THE SUCCESSORS: THE ANTIGONIDS

Posted by ritaroberts on June 23, 2016 in Uncategorized

3 quasi-identical tablets on rams. But what are the “items related to rams ”? What a quandary!

3 quasi-identical tablets on rams. But what are the “items related to rams ”? What a quandary! The written text of all three of these tablets is identical. Only the total numbers of rams and so-cal…

If anyone has any ideas please leave a comment on Richards blog as well as mine.  Thank you.

Source: 3 quasi-identical tablets on rams. But what are the “items related to rams ”? What a quandary!

Posted by ritaroberts on June 20, 2016 in Uncategorized

Timbers from the ancient Egyptian Pharaoh Khufu’s second solar boat have been discovered on the Giza Plateau, writes Nevine El-Aref

Posted by ritaroberts on June 14, 2016 in Uncategorized

Pylos tablet Eo 269, wool carding and the production of wheat

This is very interesting Linear B translation from my teacher  Richard Vallance. Click on the link below to read the full post.

Posted by ritaroberts on June 11, 2016 in Uncategorized

Posted by ritaroberts on June 11, 2016 in Uncategorized

Buried in the Mud from AD 57

Buried under 20ft of mud for almost 2,000 years, these simple  Roman wooden tablets are the earliest hand written documents ever found in Britain. Among more than 400 unearthed by archaeologists, they include the first known reference to London – and the first IOU. 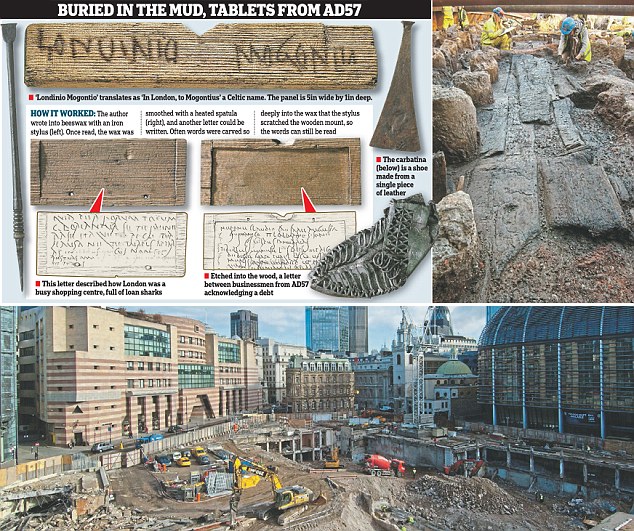 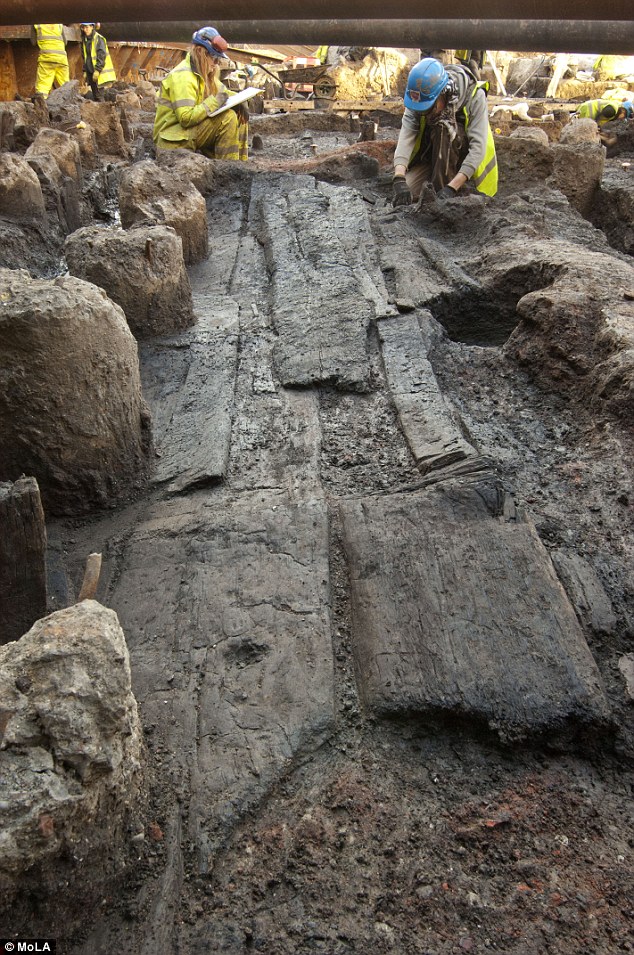 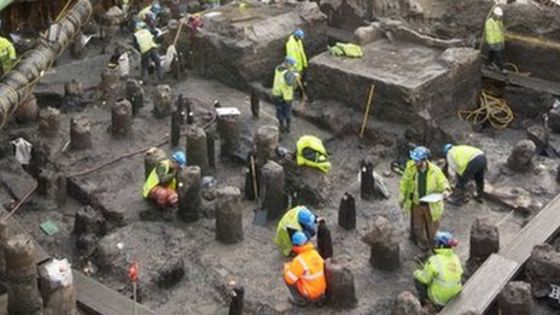 The entire streets of London uncovered in the city.

These tablets were found beneath a pub in the city during work on the financial news company Bloomberg’s new European headquarters near Bank Tube station. Most of the documents written in wax on a folding wooden frame the typical writing tablet of the Roman period,date from between A.D.55 and  85. They were dumped by the Romans on the Banks of the River Walbrook. There, the mud prevented air getting to the wood therefore stopping it from rotting.   Sophie Jackson archaeologist and director at Museum of London Archaeology said, “The mud of the river was like the lava of Pompeii, preserving the best collection of wax tablets ever found in Britain.”

The tablets made from wood recycled from wine caskets imported from the continent, give a remarkable picture of a Roman Lond the cooper, oppositeon teeming with businessmen, lawyers, tradesmen and slaves. Within a few years of being established, the city was already a mix of commerce, eating, socializing and fashion.  Among the documents found are wills, disputes over debts and references to heavy beer drinking. They also provide an insight into the Roman postal system. Early Londoners wrote letters in soot-blackened beeswax with an iron stylus, or a pen-shaped needle. Once the recipient read the letter, he smoothed the surface with a heated spatula, and wrote another letter in the wax, often carving so deeply  he scratched the wooden mount, so although none of the wax remains today, inscriptions can still be read in the wood. The writer would carve the address into the outer wooden surface of the folding boxes, tied it up and sent his slave to deliver it. Addresses were much more simple then, having no house numbers, just the names of neighbours. One address read:  ‘ You will give this to Junius the cooper, opposite Catullus’s house.’

After they were excavated the tablets were kept in water ,carefully  cleaned and treated with a waxy substance then freeze dried.

The oldest tablet which   can be dated exactly is a letter between two London businessmen, acknowledging a debt-then as now, the city revolved around money.  References to a consul of the time mean it can be dated to the year we now call AD57 – only nine years after Londinium  was founded by the Romans. It says it was written on the sixth day before the ides of January – or  January 8.  It reads : ‘I Tibullus, the freedman of Ventustus, have written and say that I owe Gratus, the freedman of Spurius, 105 denarii ‘  Another tablet contains the  address ‘Londinio Mogontio’ meaning ‘In London to Mongontius the earliest references to London. From where it was found in the layers of mud, archaeologists have dated it to AD65-80.

One letter .written around AD 43-53 shows Roman London was a busy shopping centre full of loan sharks. Written to a sloppy businessman, it say’s “They are boasting through the whole market that you have lent them money.’  Other finds include a soldiers will from AD67. discovered in the foundations of what was Britain’s earliest law firm. There are also writing exercises, perhaps from the first London school, listing the letters of the alphabet- ABCD – and a series of Roman numerals. Another tablet records a debt to Crispus, a brewer, for supplying nearly 3,000 pints of beer.

The 14,000 finds at the Bloomberg site include 200 styluses used for writing the tablets, 300 brooches and a dozen of different shoes, including a soldiers hob-nailed boot.  A  bread oven has been found, as have the remains of north African cockroaches which fed off piles of grain. Dr Roger Tomlin, a Roman historian  and fellow of Wolfson College, Oxford who has translated the letters, said: ” The Bloomberg writing tablets are very important for the early history of Roman Britain and London. I am so lucky to be the first to read them again, after more than 19 centuries and to imagine what these people were like, who founded the new city of London. What a privilege to eavesdrop on them: when I decipher their handwriting, I think of my own heroes, the wartime academics who worked at Bletchley Park.’

Some 129 people are mentioned in the letters, including Roman emperors and aristocrats, slaves, and a soldier who had fought for Emperor Augustus. There are no women mentioned but London was already an international city. There are references to Roman and Celtic names, as well as soldiers from Gaul and the Rhineland-modern France and Germany. Among items discovered in the mud are spearheads and fragments of armour- because of the ever present threat of revolt from the native Celts , Londinium was heavily fortified. One of the tablets is a contract dated to AD62 made shortly after a rebellion led by Boudica, recording 20 loads of provisions sent from Verulanium (St Albans) to rebuild  the destroyed city of Londinium.

More that 700 of the finds will be displayed in the new Bloomberg building from autumn next year.

This post courtesy of Harry Mount The Daily Mail.

Posted by ritaroberts on June 6, 2016 in Uncategorized

Posted by ritaroberts on June 4, 2016 in Uncategorized

New feature on Linear B, Knossos & Mycenae: famous quotes from Greek & Latin authors in Linear B

Please also leave a comment on my teachers blog. Thank you

Posted by ritaroberts on June 2, 2016 in Uncategorized

Invitation to join The Premier Network of Major Classical Greek and Latin sites on the Internet:

Invitation to join The Premier Network of Major Classical Greek and Latin sites on the Internet: Linear B, Knossos and Mycenae is spearheading a major initiative to bring together and co-ordinate a…

Source: Invitation to join The Premier Network of Major Classical Greek and Latin sites on the Internet:

Posted by ritaroberts on June 2, 2016 in Uncategorized