RSS
← 2016 excavations at Nea Paphos completed – The Archaeology News Network
You do not want to miss this Fantastic Twitter account, FONT design company of the highest calibre! →

The worlds oldest surviving shoes date back to somewhere around 10,000- 13,000 years. They were a pair of sandals made of sage bark and other fibres  and were found in a cave nr Rock Fort Oregon in the United States. Below is one in the collection at the Museum of Natural and Cultural History at the University of Origon 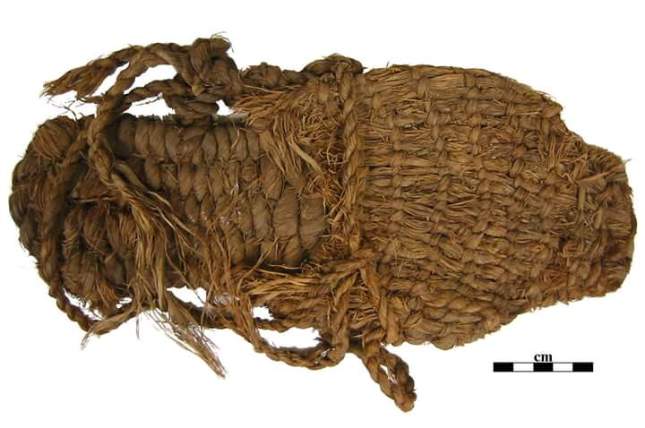 . The oldest leather shoe found in a cave in Armenia was around 5,500 years old. These shoes were made of a single piece of leather and also stitched with leather thongs.

During Alexander the Greats time there was an increase in wealth, and leisure and the development of the arts and sports, which led to the creation of many sandal styles where rules were set as to which sandal was worn for a specific type of occasion. Basic sandals began to appear around 2,000 BCE and the Egyptians, Greeks Romans, and the Etruscans wore simple pieces of leather under their feet that were bound to their ankles with most likely rawhide laces..

An old shoe found in a cave in Armenia.

A moccasin is a simple shoe often made out of a single piece of leather and stitched together and held closed with leather laces. These moccasins were popular with the indigenous Americans and American pioneers.The basic moccasin type of shoe was worn for thousands of years world wide.  The Neolithic people made simple shoes like moccasins which were worn until the Middle Ages.

CHOPINS were a form of platform clog and worn in the Middle Ages and became popular with the elite at first to protect the thinner shoes of that time. 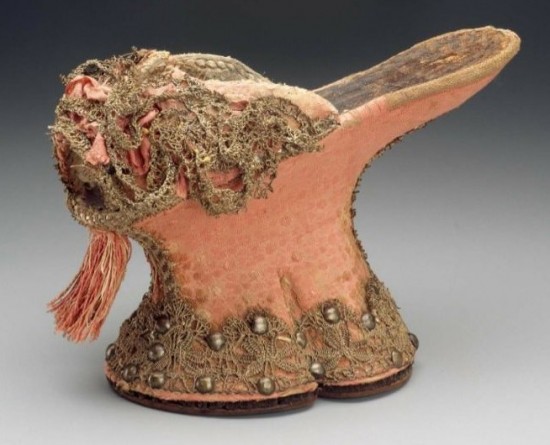 Fancy Chopin shoe most likely covered in velvet. Worn by the Elite.

Of course, we must not forget the ancient Greek shoes of which there were different styles for the said occasion. The EMBADES boot design for instance was cut in different styles. To ensure comfort for the wearer, the boots had an enclosed shape. Felt or fur was used by shoemakers to design the outer lining of these boots.       Unfortunately I could not find a picture of the Embades boot.

The rugged soles of these boots were excellent to tread the rocky terrain and were designed for the outdoors  offering the wearer protection and comfort to the wearer. The half boot designs and flat sandal designs made with soles made from cowhide leather were popular among individuals in ancient Greece. Because of their durability, numerous designs of these shoes were worn in military combat by soldiers. The uppers of these boots consisted of a cross stripped design.

These boots had high soles and were designed to give an individual a raised height. When worn by actors in ancient Greek theatres, the design differed in accordance with male and female characters. Raised soles of boots were often associated with tragedies in Greek theatre. Boot with  a low sole were commonly worn by comedians in ancient Greece. Shoes with raised heels and low platform  heels were an essential part of attire in ancient Greek costumes worn by actors in different forms of theatre.

These boots were made from leather or cloth with closed laces overlapping each other in a crisscross design. The length of these boots varied in accordance with an individual’s preference. Calf length and knee length boots worn by soldiers,, hunters and actors in Greek theatre. Hunters and travelers preferred wearing buskins that covered the entire shin as it protected them from poisonous bites from reptiles at night. Luxurious buskins with intricate designs and fur covering were worn by affluent individuals.

These were boots worn by priests, countrymen and philosophers. A variety of these shoes were also worn for ceremonies and rituals.Boots with elegant embroidery patterns were popular among women. These shoes were made from leather, felt or linen. Shoes and boots worn by women were adorned with pearls and ornaments to signify their status. 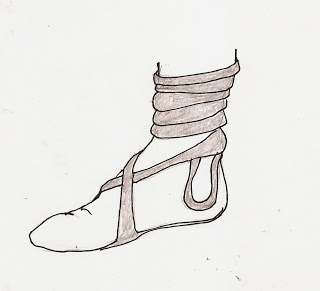 In Greek mythology Hermes, known as god of nature, and a messenger god, is seen wearing sandals that had wings on the rear side. Wings on sandals were symbolic of courage, bravery and swiftness in ancient Greece. These sandals would have been worn by individuals that were swift, fleet-footed and known for their valor. 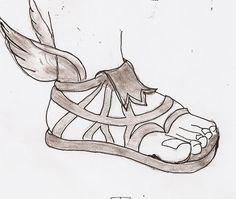 It goes without saying that the different styles and designs of footwear in ancient Greece were a significant part of ancient Greek fashion.

Today we can see the shoe, boot sandal and slipper designs are an inspiration from Greek  and Roman footwear.

Klompen shoes or clogs have been worn since medieval times. Originally made with a wooden sole and leather top  or strap tacked to the wood. Eventually, the shoes were being made entirely from wood in order to protect the whole foot. They were originally made with elder, willow and other popular woods of the time. The first Klompen or clog makers dates back to around 1570 in Holland and worn by farmers, fishermen and factory workers to protect their feet from nails, fishing hooks or any other sharp implement.  These clogs were painted or  carved, popular colours were yellow red or black. Each clog maker had his own design. These shoes are still made today and still as popular. 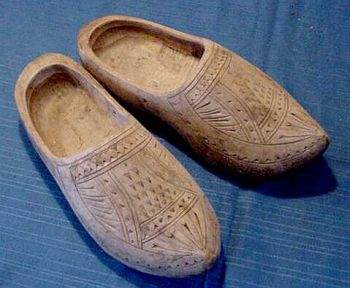 There are many more ancient shoe designs but far to many to include in this post. It is astounding to note that so many of our modern shoe designs originate from ancient times and still look as impressive as they did  then..

Posted by ritaroberts on December 22, 2016 in Uncategorized

← 2016 excavations at Nea Paphos completed – The Archaeology News Network
You do not want to miss this Fantastic Twitter account, FONT design company of the highest calibre! →

4 responses to “Ancient and Early Footwear.”