HOW TO SAY 8 WORDS in Egyptian hieroglyphics, Mycenaean Linear B, ancient Greek and modern Greek!

HOW TO SAY 8 WORDS in Egyptian hieroglyphics, Mycenaean Linear B, ancient Greek and modern Greek!

Posted by ritaroberts on September 30, 2018 in Uncategorized

Translation of Linear B tablet KN 708a M h 02 by Rita Roberts: 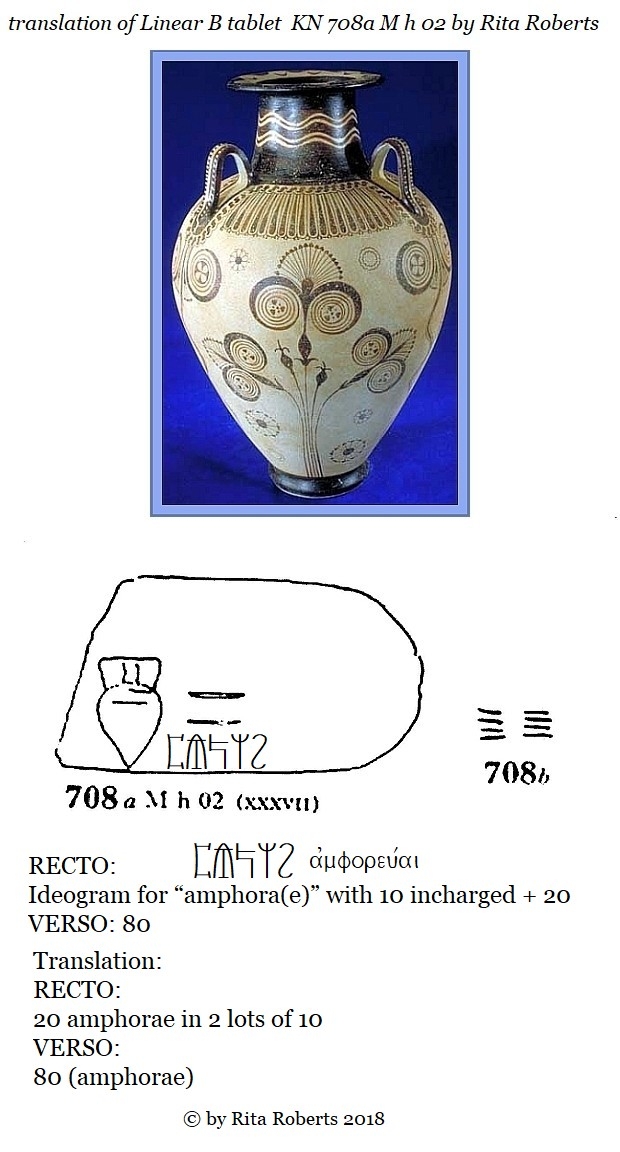 Posted by ritaroberts on September 29, 2018 in Uncategorized

Posted by ritaroberts on September 29, 2018 in Uncategorized

Posted by ritaroberts on September 28, 2018 in Uncategorized

via PYRAMID in Egyptian hieroglyphics, Mycenaean Linear B, ancient and modern Greek

Please click on the link above to see the rest of this post.  You may want to study the Egyptian hieroglyphs along with my teacher Richard Vallance.

Posted by ritaroberts on September 28, 2018 in Uncategorized

Among the remarkable artifacts recovered by MOLA archaeologists on the site of the new Bloomberg headquarters in London 405 writing tablets were recovered. Of these, 87  have now been deciphered, providing a tantalizing  insight into the lives and legal wrangling of the first Londoners. Here Roger Tomlin and Sophie Jackson revealed to Mathew Symonds what Britain’s earliest authors had in their minds.

A modern audience could be forgiven for feeling that the advice offered in the oldest readable document from Britain has timeless appeal. The text is scored into a broke4n wooden tablet, which is addressed to Titus, who appears to be a poultry keeper. In the enigmatic, only half- familiar lettering of Latin handwriting Titius’  anonymous correspondent observe4s ‘ because they are boasting through the whole market that you have lent them money. Therefore I ask you in your own interest not to appear shabby… you will not thus  favour your own affairs…’  If this letter ever carried a date it has long since been lost, but the layer it was deposited in belongs to A.D.43-53 Seem8ingly then, within a decade of the Roman invasion of Britain and perhaps five years of the foundation of London, its market was rife with gossip about the perils of bad debts\.

We do get glimpses of a carpet bagger business community in the very early years of London,’ explains Roger Tomlin, a specialist in Latin handwriting at the University of Oxford. This tablet is obviously describing an ill-judged loan, and the writer goes on to offer some obscure moralising comfort. He’s saying that you must face up to this gentleman and don’t worry too much about it. Whatever the disaster is perhaps  he is not going to get his money back because he’s lent it to crooks – we simply don’t know. The allusion to the market may be a reference4 to the new forum of London, or even a metaphorical reference to “the market”. But it is an extraordinary example of activity that we can only see the tip of the iceberg of.’ Many equally evocative snapshots of life in Londinium are reserved in the Bloomsberg tablets.

Unlike the famous  Vindolanda tablets, which overwhelmingly comprise  ink writing on thin strips of wood, the Bloomsberg examples are mostly fragments of the famous Roman waxed tablets. They consist of a thin strip of silver fir, a regular grained soft wood , which was recessed  and filled with a black wax,’ says Roger. ‘This was a mixture of beeswax and matt black ,very fine  carbon. The writing was etched into it using a stylus, which cuts through the wax and exposes the paler wood behind. So you are reading paler coloured hand – writing against a black background’. Such tablets rarely survive  complete in Britain, because the same waterlogged deposits that preserve the wooden backing tend to make the wax perish. Apart from a few tenacious traces of the substance, the Bloosberg site was no exception.

One of the advantages of using wax is that heating it allows the existing message to be erased , creating a literal  tabula rasa, or blank slate. Given that the whole point of the tablet is that the wax holds the message. It seems inevitable that once the wax leached away it would take the text with it. Fortunately this is not always the case. Sometimes the scribes wielded their styli with such vigour that they sliced through the wax and pierced the soft wood beneath, engraving the text into it. If this happened every time a new message was added, the result was an uninteligible mass of superimposed letters. Fortunately, 87 of the Bloomsberg tablets survived in what could be thought of as a ‘Goldilocks’ state: text that had been scored into the wood, but not too many times.

This tablet forms part of an IOU from the princely sum of 105 Denarii. The debt is equivalent of about half the annual pay of a Roman Legionary soldier

In order to make the stylus strokes as visible as possible, the tablets were photographed repeatedly, while raking light was directed from numerous different angles. Armed with composite images of the tablets, it took Roger about a week to make sense of each one ‘When I decipher their handwriting’, he remarks, ‘I think of my own heroes, the wartime academics who worked at Bletchley Park.’  Rather than intercepted enemy transmissions, though, the Bloomsberg tablets were recovered from the mud beside the former Walbrook rover. This has long since vanished beneath modern London but its valley would have been a major feature of the Roman town. Although some of the tablets were broken fragments that had been unceremoniously dumped in the Walbrook, others may have been found by the MOLA team in the room where they were once archived.

The site is right in the heart of the City’, says Sophie Jackson, a director of MOLA, ‘which is one of the richest archaeological areas in the country. The Walbrook may initially have been used as a boundary for the original Roman settlement, but as Londinium expanded across th Walbrook valley, it had to be managed. So they brought in what was essentially landfill in order to raise ground level and create platforms, which they built on. In one of the buildings there was a small room with a clay floor were 19 writing tablets were found. The text was visible on some of them and it looks like they were legal documents. It is thought that one may have been a Roman army officer’s will, dated to A.D.67.

The earliest Bloomsberg tablet that still carries a date was written in the consulship of Nero Claudius Caesar Augustus Germanicus for the second time and of Lucius Calpurnius Piso, on the sixth day before the Ides of January,’ which is a long- winded way of saying 8th January AD 57. The text goes on to delivery and eye watering IOU: ‘l, Tibullus the freedman of Venustus, have written and say that I owe Gratus the freedman of Spurius 105 denarii from the price of the merchandise , which has been sold and delivered. This money I am due to repay him or the person whom the matter will concern

This was my favourite tablet’, says Roger, ‘ because it was possible to read the whole of the surviving text. It concerns two freedmen, that is manumitted slaves, of Roman businessmen who are probably  now acting as partners of their former owners. Tibullus is a rare name, though it is also the name of a poet so it is possible that his master had literary inclinations and named him after the poet. Tibullus writes to say that he will continue to repay the money that he owes, with interest, in due course During this period. 105 denarii is about half of what a Roman legionary soldier would earn over the course of a year. One denarii is roughly one man’s skilled work for a day, so this was a considerable sum.

Perhaps the most historically significant tablet is dated  21st October 62. Although only a little  under six years had passed since Tibullus issued his debtor’s contract, Londinium fortunes had seen a bloody and brutal reversal in the interim. It was only a year or two since Boudica’s warriors had rampaged through the town and also devastated Colchester and Verulamium.The AD 62 tablet, though, suggests that the recovery was well under way. It states: ‘ I, Marcus Rennius  Venustus,  have written and say that I have contracted with Gaius Valerius Proculos that he bring from Verulamium by the Ides of November 20 loads of provisions at a transport- charge  of one quarter denarius for each.

Above. Despite the devastation wrought by Boudica’s warriors both Verulanium and Londinium appear to have been operating again within a year or two of the revolt. This text arranges for the transport of provisions from Verulanium to London to arrive by 13th November AD 62. 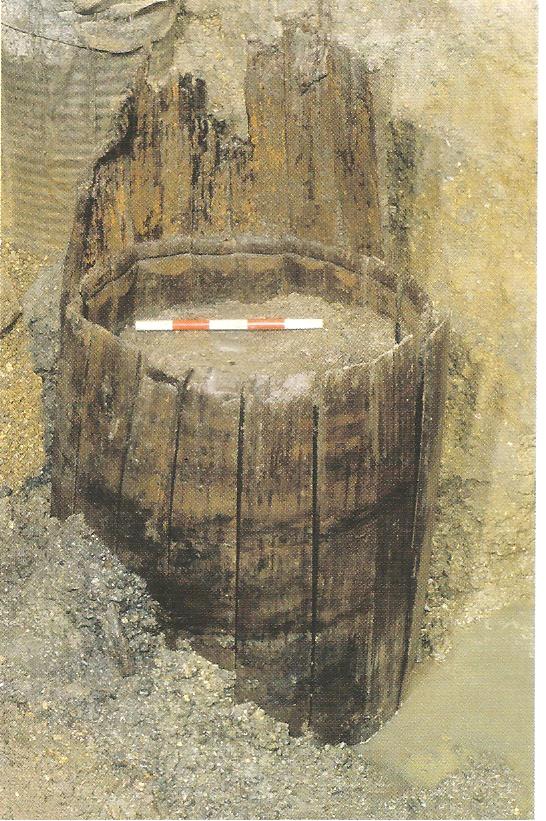 The writing tablets seem to have been made from recycled barrel staves and head boards. This barrel from nearby found an afterlife as a well lining.

Posted by ritaroberts on September 25, 2018 in Uncategorized

Posted by ritaroberts on September 21, 2018 in Uncategorized