Archaeology (The Conservation of a Pithos)

There are many Pithoi (storage vessels) found on archaeological sites in Crete. These huge pots are sometimes as tall as six foot and used to store, as well as export such commodities as olive oil, wine and other such items. Sometimes they have been found complete like those discovered at the Palace of Knossos and Malia Palace in Crete. Other times they are found broken into many sherds and mixed with fragments from different vessels such as cooking pots,dishes or cups. Of course there are many other items found by archaeologists when excavating a site such as, bones,both human and animal bones, flint implements, a lamp or bowl made from stone or gypsum, a marble statue of a goddess, even metal or wooden objects. The Minoans diet included fish, so it comes as no surprise that many shells have been found on archeaological sites. The murex shell was the most treasured and is believed that the Minoans made their bright purple dye from a gland extracted from the murex itself.

The Instap Study Center for East Crete is where my partner John and myself work with other archaeologists on finds from excavations around the area. There are different rooms where we work depending on what work  there  is to be done. John works on the huge Pithoi and I usually work on Minoan cooking pots,cups or dishes,this involves sorting many broken sherds which have first been washed, into a system where they can easily be seen when having to join them together. For instance, an ancient cooking pot is usually a tripod vessel so I would begin by placing all the base sherds onto trestles provided then body sherds followed by rims and sometimes handles. The body sherds are the hardest to find when trying to find pieces of the same pot, handles and feet which had broken from pots are set aside in the hope that we find more fragments to fit together. Occasionally we are lucky to discover all the fragments are from the same pot and can be put back together to form a complete vessel,when this happens it is very rewarding. Of course everything has to be catalogued for archivel purposes and for other archaeologists when a site is resumed.

At The W.D.E. Coulson Conservation Laboratory of the INSTAP Study Center for East Crete under the supervision of  Dr Stephania N. Chlouveraki,Chief Conservator. John was involved with the conservation of one of the large 4000 year old pithoi which took almost six months to reconstruct from many sherds. Here are a few pictures to give you some idea of the work involved but ‘Oh so rewarding when finished. 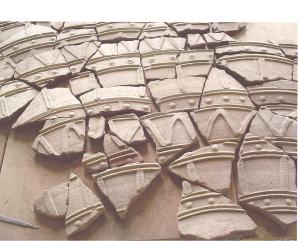 Some of the Pithos Sherds 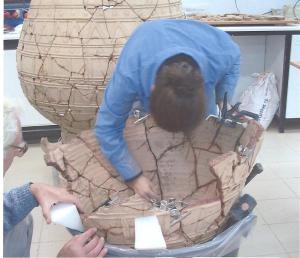 Working on the Base of Pithos 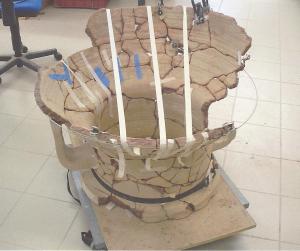 Taking shape from the Rim. 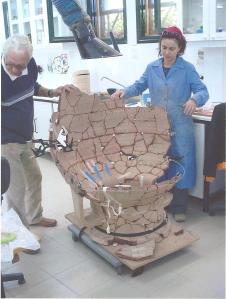 Conservation looking good. John on the left with 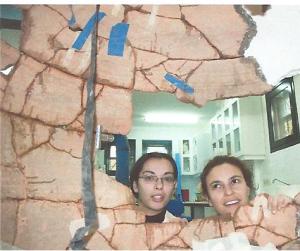 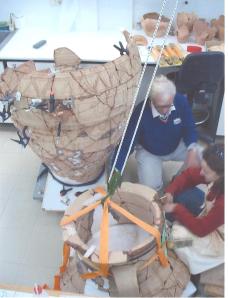 Preparing to place shoulders and  Rim 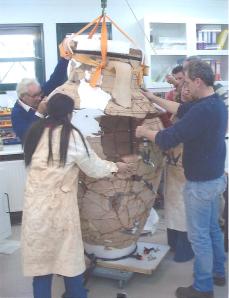 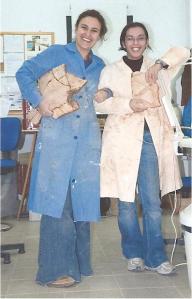 In my next post I will talk about the Tyrian  Purple dye extracted from the murex so prized by the Minoans.

Posted by ritaroberts on April 23, 2012 in Archaeology and Conservation