The Enchantment of Woven Silk.

Some years ago I managed to aquire premises which at the time belonged to a gentleman who repaired watches, clocks and other mechanical devices. It was a small shop with a nice display window which was great for the business I wanted it for, My little Antique shop.

When I finaly moved in. there was a lot to be done such as, painting the walls inside,putting up shelves.painting outside walls, repairs to the roof,stripping the wooden window frames and repainting them, and of course having to hire someone to make me a sign once I decided on a name. My family and friends all chipped in to help with the renovations.

We discovered that there was a basement to this shop where there were all mannor of, what looked like rubbish at the time until we had cleaned the whole area and taken bits and bobs upstairs, including small pieces of furniture. There were several items of blue and white china cups,plates,bowls, jugs,an old sewing machine,some drinking glasses a glass decanter and a couple of pewter tankards. Most of these items were of the 19th-early 20th century but when cleaned up were suitable to put in my shop window as a start to my enterprise.

Two of the most interesting things we found in this basement was an old cigarette machine and a chocolate machine which still had some packets of Wills cigarette’s and Kensitas cigarettes left in there.Believe it or not, there was also some chocolate in the machine. We managed to get the cigarettes and the chocolate out of the machines because I knew that the packets they were in were collectable items and they were in good condition.Once I placed these in the window it created a lot of interest and discussions amongst many people who rememberd these items. The machine’s themselves were quite large clumbersome things which I told the dustbin men to take away. Never thought at the time to take them to auction as they were most likely collectable to someone

In 1933 and 1934 The Kensitas cigarette’s had a small card inside the packet which opened out to reveal beautiful woven silk flowers. As there were only a few packets left in the machine we found we were only able to retrieve about six of these cards you can see below. However, not in very good condition after being moved around from different places over the years. 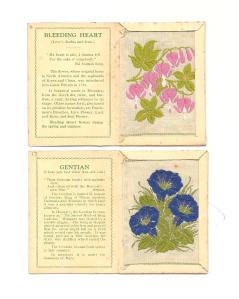 You could buy Albums in which to put the Kensitas silks inside and were sold for each of the sizes costing l/- (one shilling) each Album.

Below are a few more Kensitas silks but in prestine condition. 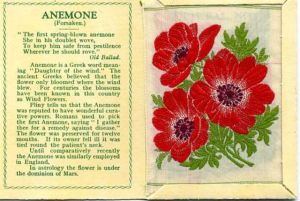 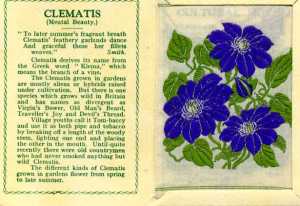 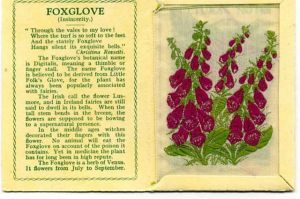 These silks are so beautiful and are now collectors items.

Posted by ritaroberts on September 19, 2012 in Uncategorized

MASTERS OF THE CAVE ART.

Europe’s oldest known  cave art could be the work of Neanderthals more than 40,000 years ago.Archaeologists now believe that the abstract red circles and stencilled handprints decorating the walls of El Castillo cave, a UNESCO World Heritage Site in northern Spain were discovered over a century ago,but until recently the paintings’ age had not been precisely established,because their lack of organic pigment made dating by radio carbon analysis impossible.

Now researchers have dated the formation of tiny stalactites on top of the images,using the radioactive  decay of uranium to establish a minimum age for the artwork of at least 40,800 years old -10,000 years earlier than previously thought.

According to new research published in science,this makes the palaeolithic paintings the earliest known cave art in Europe, 5,000 – 10,000 years older than examples in France,and pushes the date of its creation back into a period when early humans and Neanderthals  co-existed in the region.

If the ancient artists were Neanderthals,this has significant implications for perceptions of our evolutionarly cousins; the development of art in early humans is considered an important milestone in the evolution of modern behaviour,asscociated with the capacity for abstract thought and possibly language.

Results show that either modern humans arrived at this site with painting already part of their cultural activity or it developed very shortly after,perhaps in response to competition with the Neanderthals-or perhaps this is Neanderthal art. That would be a fantastic find Dr Pike from the University of Bristol said,as it would mean the hand stencils on the walls of the caves are outlines of Neanderthal hands. But more examples would need to be dated to see if this was the case. 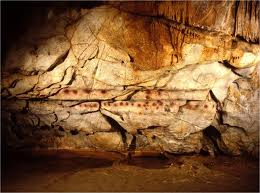 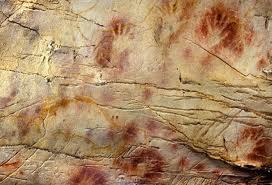 Archaeologists have identified the worlds oldest instruments,showing that early modern humans were making music 40,000 years ago.

Two flutes,one made from bird bone and the other from mammoth ivory,were uncovered during excavations at GeiBenkiosterle cave in south-west Germany between 1973 and 1990. Now researchers led by the University of Oxford’s  Prof. Tom Higham have obtained new radio carbon dates for animal bones found in the same layer as the instruments,suggesting a date of c40,000-41,000 BC  . This pre-dates another bone flute,also from south west Germany dated in 2009 to c35,000 years old, and previously held to be the earliest.

The new findings suggest the Aurignacian culture began at the site 2,000-3,000 years earlier than previously thought,and that modern humans lived in central Europe  before the extremely cold climate phase of c 39,000- 40,000 years ago rather than arriving after it.

POTTERY DATES FURTHER BACK IN TIME.

Fragments of 20,000-year-old pottery discovered in south east China have pushed back the use of ceramics to 10,000 years before agriculture. This shows that pottery  was invented by mobile hunter- gatherers rather than developing from the more settled lifestyles of early farmers,as was previously believed.

Found during the excavations at Xianrendong Cave,the sherds are 2,000-3,000 years older than any pottery previously found,and date from the peak of the last glacial period, when climate dramatically changed regional food resourses.

Many of these sherds show evidence of burning, suggesting that they may have been used for cooking-perhaps as people tried to aquire more nutrients in the cold climate. Project leader Prof Ofar Bar-Yosef of Havard University says ” Could the use of pottery pre-date these finds? With systematic excavations, we hope to find out when humans made pots and moreover, what they used them for.

Pottery fragments from Xianrendorg Cave shown to be the oldest ever found.

Courtesy of the World Archaeology Magazine.

Posted by ritaroberts on September 9, 2012 in Uncategorized