An Anglo Saxon Box of Keepsakes

Around l,300 years ago, a young woman was laid to rest beside the River Alde in Suffolk. Although she was buried in one of the earliest- known Christian cemeteries  in Anglo Saxon East Anglia, a box of keepsakes was placed in the grave at her feet.. Now her remains have been rediscovered by Suffolk County Council archaeologists and volunteers from the Aldeburgh and District Local History Society (ADLHS) in a three- week excavation at Barbers Point.

Corroded iron box fittings were found above the foot bones of the woman, who has been named ‘Edwina’ by the team. The straps not only bore impressions from the wood that they bound ,but also  rare traces of textile- perhaps Edwina’s shroud- while their distribution suggests a casket measuring 20cm square.

Within this area was a diverse collection of artifacts, both domestic items including a spindle whorl and a possible key, and more enigmatic objects that may have held personal significance for  Edwina. Among these items were a fragment of blue glass; a stone with a hole in it, perhaps a fossilized sea urchin; a small piece of amber; and a cowrie shell, originally from the Indian ocean There was also a bronze terret ring from an Iron Age harness fitting, and several iron hoops, one strung with two glass beads.

Previous excavations at Barbers Point had uncovered ten Anglo-Saxon graves, but none of these contained artifacts. This, together with the burial’s east-west orientation and the fact that Iken, where St Botolph is reputed to have built his minster in AD 654, lies directly across the river from the site, led the team to conclude that this was a Christian cemetery.

The latest work, funded by the Touching the Tide project ( which recently received a three million Heritage Lottery Fund Grant ), has added to this picture, however, nine more graves were found, all interpreted as Christian, but- along with Edwina’s grave- two more included objects: a knife with another young woman, and a small bronze coin or token beside the head of a 7-8 year old child.

We have tentatively dated the cemetery to the mid 7th century, as most of our previous radiocarbon dates have been clustered around AD650-7l5; said Jezz Meridith, Project Officer for Suffolk County Council’s Archaeological Service Field Team. We feel pretty certain that it is Christian;; the cemetery was clearly within the settlement’s enclosure ditches, and Saxon Pagan cemeteries are normally away from, but in sight of, the main settlement’.

He added:  ‘Although  we have interpreted the box artifacts as mementoes there are parallels with what are referred to as ” purse groups”, which continue into the Christian era. These often include interesting stones, amber and ancient artifacts, and are sometimes interpreted as “amulets” or  ” curing stones “.

Posted by ritaroberts on February 23, 2014 in Uncategorized

A  major breakthrough about to be solved. The Oldest undeciphered writing tablet.

Posted by ritaroberts on February 15, 2014 in Uncategorized

Another Look at Delft Ware Pottery

One of my previous posts about pottery was that of the  ( Post Medieval period ) in which  I spoke of the beautiful Delft Wares. The Delft potters are one of my favorites so I thought that those of you also interested in pottery in Archaeology would enjoy further reading on this subject.

Delftware began during the reign of Henry Vlll. a derivative of Italian Maijolica. Delftware is a type of earthenware characterized by its opaque white enamel glaze , made from a mixture of tin and lead ash, powdered glass and water.

Before the development of this revolutionary enamel, British potters had been severely restricted in terms of decoration by the drab browns and greens of the clays they were forced to use. The clean white finish of the Delftware allowed the potters to paint patterns, landscapes and even portraits. They painted their designs in bright colors derived from various minerals- cobalt blue was the most popular, although copper green, manganese purple, iron red and antimony yellow were also used.

The first London Delftware dates from around l550, and includes plates, vases and drug jars in various colors . Much of the English Delftware tended to imitate Chinese, while London potters began to develop their own distinctive style during the l7th century. Straight- sided posset pots( from which hot, milky  alcoholic beverages were drunk and barrel- shaped  mugs were among the new forms that emerged at this time.

My favorite at this time, those beautiful ” Blue dash chargers” characterized by a series of blue marks around the rim, were made in various sizes and designs, including depictions of Adam and Eve, pictures of tulips and portraits of statesmen- images of Charles the second are particularly prevalent

The l8th century craze for tea inspired the creation of a plethora of tea bowls, pots, caddies cups and saucers all made in Delftware. As the public appetite for Delftware grew, yet more forms were introduced by potters, including flower bricks and puzzle jugs. These latter were often painted with witty inscriptions challenging the reader to drink without spilling.

The Delftware potters always had one eye on the Orient for their inspiration. The technique of decorating in white on a pale blue background was almost certainly the result of endeavors to replicate a similar style of ornament found on Chinese pots, just as the tin glaze used on Delftware was born, at least in part, from a desire to mimic fashionable Chinese porcelain.

It is interesting how the puzzle is solved. The jug’s handle and rim were made hollow, something like straws . The handle opens to the inside of the jug near the bottom, then goes up the side a little, bows out, and then connects to the opening inside the rim. To successfully drink without spilling, the drinker has to suck from the correct spout. Some puzzle jugs had additional holes which had to be covered with a finger before the ale could be drawn, or hidden holes to make the drinking even more challenging.

Posted by ritaroberts on February 14, 2014 in Archaeology and Pottery 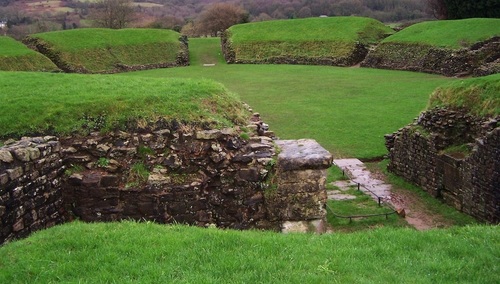 There is plenty of evidence to be seen of the Roman occupation in Britain such as these ‘ Roman amphitheatres.

Posted by ritaroberts on February 9, 2014 in Uncategorized