I Wish You Enough

Recently I overheard a Father and daughter in their last moments together at the airport. They had announced the departure.

Standing near the security gate, they hugged and the Father said, ‘I love you, and I wish you enough.’

The daughter replied, ‘Dad, our life together has been more than enough. Your love is all I ever needed. I wish you enough, too, Dad.’

They kissed and the daughter left. The Father walked over to the window
where I was seated. Standing there I could see he wanted and needed to
cry. I tried not to intrude on his privacy, but he welcomed me in by
asking, ‘Did you ever say good-bye to someone knowing it would be
forever?’

Posted by ritaroberts on December 28, 2013 in Uncategorized

I have no idea who put this together, but it is wonderful!

Long ago and far away, in a land that time forgot,
Before the days of Dylan , or the dawn of Camelot.
There lived a race of innocents, and they were you and me, For Ike was in the White House in that land where we were born,

We longed for love and romance, and waited for our Prince,
Eddie Fisher married Liz, and no one’s seen him since.

We danced to ‘Little Darlin,’ and sang to ‘Stagger Lee‘
And cried for Buddy Holly in the Land That Made Me, Me.

Only girls wore earrings then, and 3 was one too many,
And only boys wore flat-top cuts, except for Jean McKinney.

And only in our wildest dreams did we expect to…

Posted by ritaroberts on December 19, 2013 in Uncategorized

I have re-blogged this post for those who have read the article on my blog about The man who deciphered the Linear B Tablets. And for Richard Vallance who is teaching me this subject. Those of you who may be interested in learning about ancient scripts please contact Richard.

This is the only blog on the Internet devoted entirely to the study of Linear B.  The entire purpose of this blog is to promote and disseminate research into Mycenaean Linear B, especially in the application of my new Theory of Progressive Linear B Grammar and Vocabulary, which adopts a totally new approach to Linear B. Throughout 2014, I shall refine the application of this theory to Linear B.   By so doing, I shall:

1. reconstruct as much of ancient Mycenaean Linear B  grammar as I possibly can, based on the scattered evidence to be found on some 5,800 tablets, most of which are unfortunately fragments.

2. reconstruct the Mycenaean vocabulary, by building on and extrapolating from the vocabulary of some 2,500 words already identified on extant tablets.  It is my hope that I will eventually be able to double the attested Linear B vocabulary, as found on the…

Posted by ritaroberts on December 16, 2013 in Uncategorized

How Did We Ever Survive.

My mum used to cut chicken ,chop  eggs and spread butter on bread on the same cutting board with the same knife, admittedly the board was washed after, but we didn’t seem to get food poisoning.

Our school sandwiches were wrapped in wax paper in a brown paper bag, not in pack coolers, but I can’t remember getting e,coli .

Almost all of us would have rather gone swimming in the lake or at the beach instead of a pristine pool.

We all took PE…and risked permanent injury with a pair of Dunlop sandshoes instead of having cross-training athletic shoes with air cushion soles and built in light reflectors that cost almost as much  as a car. I can’t recall any injuries but they must have happened because they tell us how much safer we are now.

We got the cane for doing something wrong at school, they used to call it discipline yet we all grew up to accept the rules and to honor and respect those older than us.

We had 50 kids in our class and we all learned to read and write, do maths and spell almost all the words needed to write a grammatically correct letter.

We all said prayers in school and sang the national anthem, and staying in detention after school caught all sorts of negative attention.

I just can’t imagine how bored we were without computers,Play Station, Nintendo, X-box or digital TV cable stations….We were not.!!

Oh yes.. and where was the antibiotics and sterilization kit when I got that bee sting? I could have been killed !

We played (King of the Hill ) on piles of gravel left on vacant building sites  (I used to play Cowboys and Indians )  and when we got hurt, mum pulled out the 2/6p bottle of iodine and then we got our backside spanked (I also got sent to my room ) Now its a trip to the emergency room, followed by a l0 day dose of antibiotics and then mum calls the lawyer to sue the contractor for leaving a vicious pile of gravel where it was such a threat.

How on earth did we ever survive.

LOVE TO ALL OF US WHO SHARED THIS ERA. I WOULDN’T TRADE IT FOR ANYTHING

THEY WERE THE GOOD OLD DAYS !!!….Life’s most simple pleasures are very often the best.

Posted by ritaroberts on December 12, 2013 in Uncategorized

Because I am learning how to read and write the ancient scripts of Crete I thought it appropriate to write about this subject on my blog.  Maybe some of you out there would be interested also in learning how to read the scripts which is useful when visiting museums. The script was written on clay tablets and first discovered by Sir Arthur Evans while excavating the great palace of Knossos, Crete in l900. It was Arthur Evans who named them Linear B. Other tablets were discovered at Knossos known as Linear A but these have not as yet been deciphered. 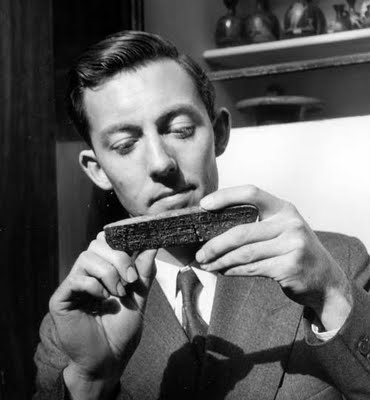 Michael Ventris studying one of the Linear B Tablets

Michael Ventris spoke European languages fluently. He studied Latin and Greek at Stowe and at the age of fourteen he questioned Sir Arthur Evans about the Linear B tablets.

Michaels interests were split, should he follow his artistic beliefs and become an architect, or should he become a classist and follow his dreams of deciphering the unknown script. He decided to become an architect and enrolled in the Architectural Association but the war intervened and he joined the RAF.After the war he returned to architecture but gradually his interest in the script reasserted itself. Ventris was again gripped by the lure of the ancient tablets, he decided to give up architecture and live off his private income for a year or so and devote himself entirely to decipherment of the tablets.

The scripts  had originally been discovered by Arthur Evans, but as he grew older Evans kept these discoveries, hoping to decipher them himself. Later more tablets were discovered by the American, Carl Blegan, at  Pylos. Now was the time for the scripts to be further investigated.

Michael Ventris resumed his work on the Linear B script and had two main methods of working, the first was that of   ‘ group working ‘ where he established a system of work notes, which he sent out to colleagues and possible rivals around the world.

It seemed clear to Ventris that Linear B was a syllabary-  that is, each sign represented a combined consonant and vowel. He devised a grid which were drawn up with architectural precision, and lettered with his superb lettering ability, he worked day and night producing work notes at the rate of about one a month.

The break through was made in March l952 when he was about to produce work note 20. He  began to realize that some of the signs seemed to indicate place names. Gradually through his constant vigilance names of towns began to emerge such as Knossos, Phaestos  and  Luktos.

On June 1st Michael Ventris sat down to type what would turn out to be his final work note, No 20, rapidly more and more words began to fit in on his grids and work notes, carpenters, wainwrights , chair makers, and bakers as did    pa- te  meaning (Father) .

A pioneering book ” Documents in Mycenaean Greek’, was written jointly by Michael Ventris and John Chadwick and published by the Cambridge University Press. However, Ventris was becoming disenchanted with the Academic world and on the 5th September l956 he left his home late at night, driving fast down the Barnett by- pass, and crashed into a stationary lorry and was instantly killed, he was only 34. Such a tragic death for one so young. Who knows ! if he had lived maybe he would have cracked the code for Linear A also.

READING THE ( LINEAR B ) TABLETS TODAY.

Whilst surfing the Internet I recently came across a website that looked extremely interesting as it was about learning how to read and write ancient script, which at that time I was not at all  familiar with. I carried on reading only to find myself becoming interested in the subject, better still as I perused further I discovered that the person whose blog I was reading was Richard Vallance and was offering to teach online, the Linear B. script .I therefor contacted him on his blog which is as follows- http://linearbknossosmycenae.wordpress.com to say I would like to attempt the course.

Richard  was delighted to accept me as his first student because he had only just started his own blog where he is approaching the study of Linear B Progressive Grammar and Vocabulary from an entirely new prospective never before done.

Although Richard is Canadian he speaks  English and French Fluently, reads Latin fluently, Greek and Italian very well also Spanish competently, and has a smattering of Japanese kanji. He is also familiar with both German and Russian. As well as being a linguist, Richard is also a widely published poet and poetry publisher.

Even as an adolescent Richard was fascinated by languages ancient and modern, learning Russian himself at the age of l7 ( which unfortunately he has allowed to lapse.) . Much like Michael Ventris whom Richard admires immensely, frequently reminding us that Ventris was a genius of the first order, Richard has taken it upon himself  to take an entirely  novel approach to the study of Linear B in his own now familiar  Wordpress blog. Linear B Knossos & Mycenae, http://linearbknossosmycenae.wordpress.com and his PINTEREST board, Mycenaean Linear B: Progressive Grammar & Vocabulary: http://www.com/vallance22/mycenaean-linear-b-progressive-grammer-and-vocabul/ where he has set about simplifying the study of the practical application of Mycenaean Linear B Progressive Grammar and Vocabulary in such a way that anyone interested in this fascinating script such as myself for instance, may more easily and more comfortably go about learning it and I have to say since taking on this course that is exactly how I feel. Richard’s tuition is excellent in as much that he allows you to explain some of the ways in which you can work best with him. I am really enjoying learning this subject and have almost completed Level 2.

Above left is an example of my script writing in comparison with the Ancient script on the right.

Professional Linguists of course will be interested in this new approach to an ancient language quite unlike any other, Mycenaean Linear B, the earliest of the Greek dialects (ca. l450-l200 BCE).

In around the year 20l6, Richard will be publishing his book, Mycenaean Linear B Progressive Grammar and Vocabulary.

Please Note:- Richards most recent Anthology, ‘ The Phoenix Rising from the Ashes ‘. an international multilingual anthology of sonnets in English, French, German, Spanish, Chinese and Farsi, can be ordered in hardcover, softcover or as an e book  from the Friesen Press bookstore                   : http://www.friesenpress.com/bookstore/browse/all/6

Posted by ritaroberts on December 2, 2013 in Uncategorized