Former Brexit Secretary David Davis MP has recently reported on his success on turning his health around with a low carb way of eating.

Mr Davis published his story in the Daily Mail, recalling the health scare he had after stepping down from his cabinet position last year. He reported that a routine medical revealed some troubling blood test results, after which his doctor sent him for a liver scan.

The scan revealed that Mr Davis had non-alcoholic fatty liver disease (NAFLD), a condition characterised by a build-up of fat in the liver, which can lead to permanent liver damage and type 2 diabetes.

On 20th November 2020 he talked to Reaction editor Iain Martin about his research of over 100 papers during lockdown on the effectiveness of Vitamin D and his discussions with Matt Hancock and the NHS about how this simple hormone could make a big difference.

Posted by ritaroberts on December 23, 2020 in Uncategorized

I think I would like to have a go at making these Linear B tablets.Especially writing the Linear B text on them.

“Clay play day” was a pretty regular feature of my time as a researcher in Cambridge – we’d get some modelling clay and try making and writing tablets in variousancientwritingsystems, or run activities for school students and families to do the same. As part of my new research project in Athens, I’m aiming to do a more systematic version of this, working in the Fitch Laboratory with researchers who are experienced in experimental work with ceramics, to understand more about how the Linear B tablets were made. The Fitch provided samples of a few clays of different levels of fineness/coarseness for me to try out, so the first stage was to prepare them to work with. Recipe: break up dry clay with a pestle and mortar, put in beaker, add water, stir. Wait for several days, realise you’ve put far too much water in, pour a…

Posted by ritaroberts on December 22, 2020 in Uncategorized

The Lipivore: What is Fat for?

Published December 2020
Canadian born Amber O’Hearn MSc. began experimenting with different forms of diet in order to regain her health and balance her mental state. She was diagnosed with bi-polar disorder following years of depression but when she stopped eating plants, those symptoms disappeared and she stopped needing medication for the condition.

She has been studying and experimenting with low carb/ketogenic diets since 1997 and more recently she has begun writing and speaking about her findings. Her review on the evolutionary appropriateness and benefit of weaning babies onto a meat-based, high fat, low carb diet, was included as testimony defending Prof. Tim Noakes in his trial.

She explains that when people hear the word Carnivore, they think of a diet high in protein as this is how we tend to use meat in our society. In this presentation she delves into the history of the human diet and points… 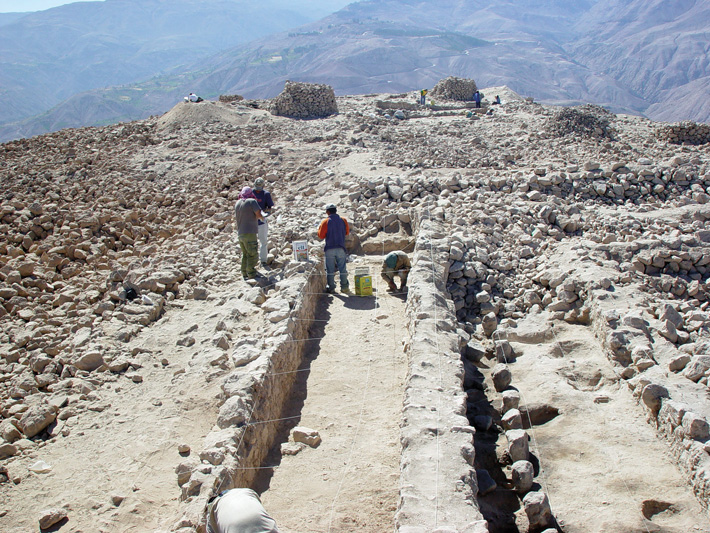 Serving jar (top), Front-Facing Deity cup (above)High atop a mountainin southern Peru, leaders at the remote administrative center of Cerro Baúl once entertained local elites with elaborate feasts that helped sustain the Wari Empire from about A.D. 600 to 1000. Central to these gatherings was the ceremonial drinking of chicha, a typically corn-based fermented beverage. Based on the size of the spaces where the feasts took place, archaeologists think that they held 50 to 100 guests who imbibed chicha from vibrantly painted ceramic cups. These cups ranged in size to reflect the status of the drinkers and were decorated with images of Wari heroes and gods, such as the Front-Facing Deity, and more local stylistic flourishes, including llamas adorning the…

Why Red Wine is Good for Your Microbiome

After experiencing a “major health event” at the top of a mountain, Tim Spector decided to investigate his diet.

Spector, professor of genetic epidemiology at King’s College London, has published more than 800 research articles on the topic and is ranked in the top one per cent of the world’s most cited scientists. His current work focuses on the microbiome. He’s also chair of the British Gut microbiome project.

Spector sifted through scientific literature, trying to identify which diet factors were good and which weren’t. And what did he found? “Lots of dogmas with no evidence to support it,” he said. “Counting calories, avoiding high-fat food, never skipping meals, get five a day. There are so many conflicting dogmas,” Spector told the audience at WIRED Health.

It’s clear we have no idea what diet works best, he claimed. Rates of obesity have tripled in every country measured and Spector…

Posted by ritaroberts on December 11, 2020 in Uncategorized