I thought my fellow bloggers would like to read something different for a change from my Linear B Studies . So this post is all about a very special gentleman,  Artist Ben  Waddams. Originally from Buckinghamshire South East England, Ben now lives in Shropshire England and is a successful British Wildlife Artist.

Ben also has a feature column in the Mid Wales Journal which I read every week, this is because my dear friend posts these papers to me from England to Crete, where I now live so that I keep up to date with what’s going on both in England and Wales.

Here Ben talks a little about his work.

Ben has lived in the United States for many years on several different occasions and traveled in search of  exotic wildlife across Central America and Africa. “I have been lucky enough to have lived and  traveled through some truly mesmerizing area’s of the world and this is where I take my inspiration from ” says Ben. Some people may make the point that filming, painting and writing about animals is not active conservation. Correct, its not, until the awareness and money made can be injected into projects . But there has to be that awareness in the first place. There needs to be that appreciation of wildlife, gained through the descriptions of the place or the portrait of the animal, for people to then dip into their pay- packet and change their lifestyles with the aim to conserve the species on this planet, which I think we all have a moral duty to do.This is why I paint , write and photograph. I try to paint ‘moments in nature’ Scenes where for the most part, the viewer plays no active role . My paintings aim to be windows into the natural world and they are concerned primarily  with animal behavior and potential energy – that moment caught in time before life resumes.

Ben’s  Xmas article in the Mid Wales Journal included the old favourite and now England’s National bird the robin. In winter they become rather fascinating in their movements .The robins we see in our gardens and throughout  towns and villages during the summer months are largely ‘resident ‘ but a small minority, usually females, migrate to southern Europe during the winter. Some of these migrate as far as Spain.

Scandinavian and Russian robins in turn migrate to Britain and Western  Europe to escape the harsher winters in their motherland, returning in the spring.  So, how can we tell which nationality the robin we are looking at is?   Well the migrants can be recognized by the greyer tone of the upper parts of their bodies. They are also a little more festive. They have a more orange breast, perfect for Xmas time.

Female robins move a short distance from the summer nesting territory to a  nearby territory while the males battle to keep the same territory throughout the year, a task made harder by the new arrivals.

Below are a few of Ben Waddams superb paintings. 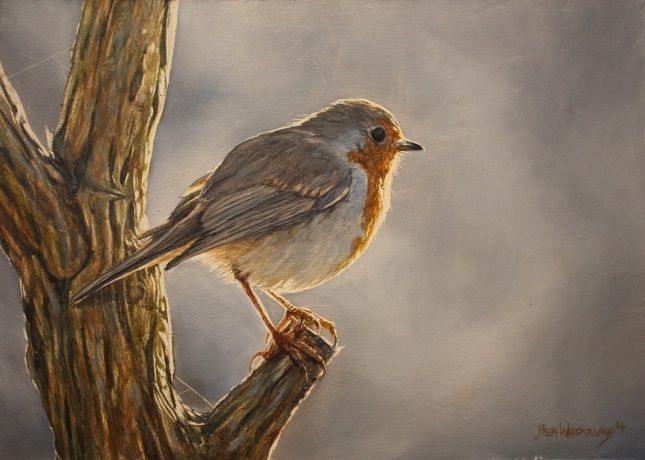 The ever popular Robin painting by Ben Waddams 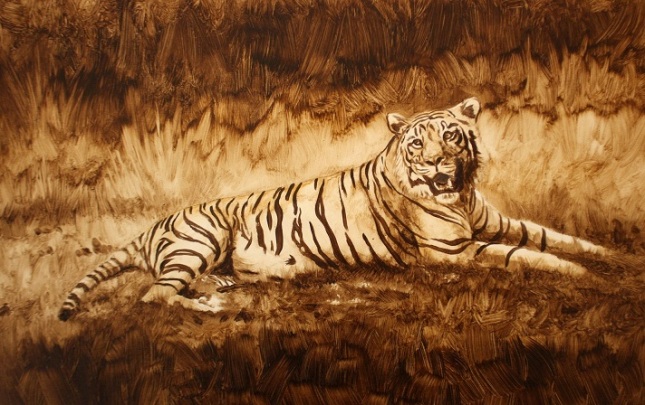 This one is my favourite. Ben Waddams sketch of a Bengal Tiger.

Posted by ritaroberts on January 23, 2016 in Wildlife