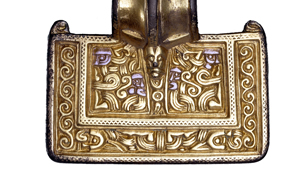 One of the most enjoyable things about working with the British Museum’s Anglo-Saxon collection is having the opportunity to study the intricate designs of the many brooches, buckles, and other pieces of decorative metalwork. This is because in Anglo-Saxon art there is always more than meets the eye.

The objects invite careful contemplation, and you can find yourself spending hours puzzling over their designs, finding new beasts and images. The dense animal patterns that cover many Anglo-Saxon objects are not just pretty decoration; they have multi-layered symbolic meanings and tell stories. Anglo-Saxons, who had a love of riddles and puzzles of all kinds, would have been able to ‘read’ the stories embedded in the decoration. But for us it is trickier as we are not fluent in the language of Anglo-Saxon art.

Anglo-Saxon art went through many changes between the 5th…

Posted by ritaroberts on May 28, 2014 in Uncategorized

The Beautiful Frescos of Pompeii

I think that most people know the tragic story of Pompeii being buried under volcanic ash when Mount Vesuvius erupted, so I will give a brief history before talking about the beautiful frescoes from Pompeii.

The city of Pompeii is a partially buried Roman town-city near modern Naples in the Italian region of Campania, in the territory of the commune of Pompeii.

Along with Herculaneum, Pompeii was destroyed and completely burned during a long catastrophic eruption of the volcano Mount Vesuvius spanning two days in 79 AD.

The eruption buried Pompeii under 4-6 metres of ash and pumice, and it was lost for nearly l700 years before its accidental rediscovery in l749. Since then its excavation has provided an extraordinarily detailed insight into the life of a city at the height of the Roman Empire. 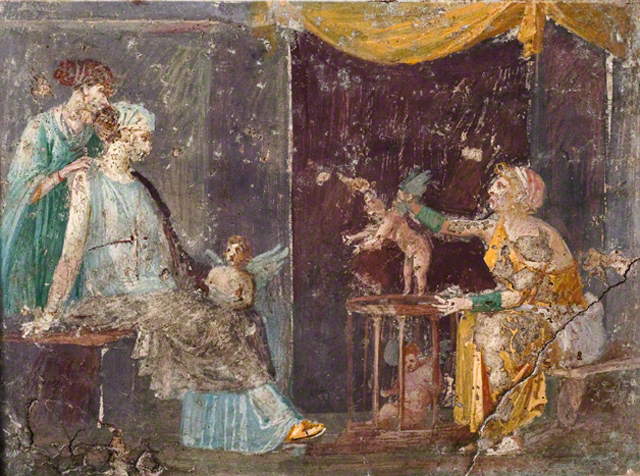 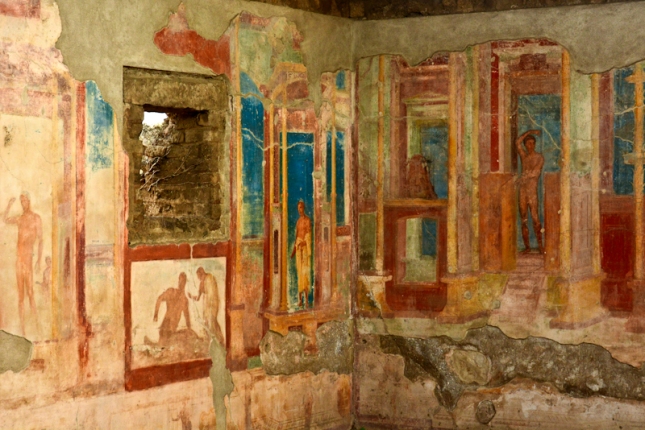 Fresco from the Villa of Mysteries Pompeii

From The Villa of Mysteries Pompeii

There are of course, many more of these beautiful frescos from Pompeii, but unfortunately there is not enough room to enter them all on my blog but you have a good idea of how vast an area they covered.

Posted by ritaroberts on May 23, 2014 in Uncategorized

We may think that we know the ancient Egyptians on account of the abundance of carved and painted images and the many texts on stone and papyrus that have survived, but these sources convey a formal, partial and sanitised view; to a large degree they tell us only what the Egyptians wanted posterity to know.

The first mummy entered the Museum’s collection in 1756, and for the past 200 years none of the mummies have been unwrapped. But modern technology, in the form of the CT (computed tomography) scanner, has transformed the way that we can study them, allowing us to see within the wrappings and the mummified bodies, in a non-invasive and non-destructive manner.

Posted by ritaroberts on May 22, 2014 in Uncategorized 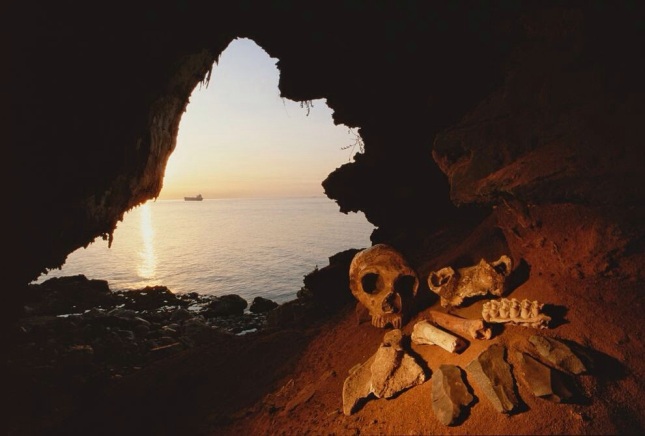 Neanderthal cooking likely wouldn’t have won any prizes on Top Chef, but a paleontologist suggests that our ancient cousins knew how to cook a mean stew, without even a stone pot to their name.

This female Neanderthal, found in a cave in Gibraltar, may have enjoyed foods heated
in birch bark trays [Credit: Kenneth Garrett, National Geographic]
“I think it’s pretty likely the Neanderthals boiled,” said University of Michigan paleontologist John Speth at a recent meeting of the Society for American Archaeology in Austin, Texas. “They were around for a long time, and they were very clever with fire.”

Neanderthals were a species of early humans who lived in Europe and the Near East until about 30,000 years ago. Conventional wisdom holds that boiling to soften food or render fat from bones may have been one of the advantages that allowed Homo sapiens to thrive…

Posted by ritaroberts on May 20, 2014 in Uncategorized

The Ancient Roman period is one of my favorite interests, so anything to do with these times has a special place for me . I have blogged about Roman pottery in archaeology, so I will now talk about the Roman oil lamp which is quite a fascinating subject. Although the pottery lamps were mostly the same shape there were also a variety of shapes made from different materials.

Oil lamps were one of the most  common household items of ancient times. Lamps made of stone or shell were used as early as the Stone Age. Ceramic lamps were used all over the Mediterranean area from 2000 B.C through the middle ages. They were used to burn oil , usually a plant oil such as olive oil that was abundant. Archaeologists find fewer lamps in areas like Britain, because oil was scarce and expensive there 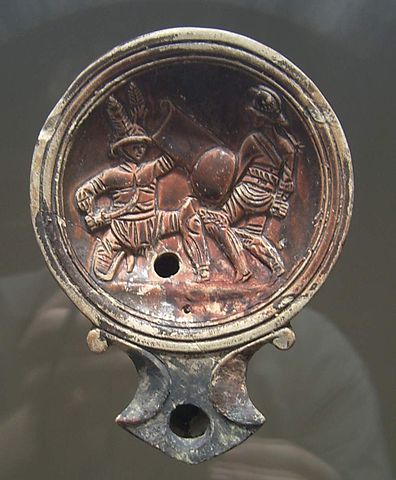 Roman Oil lamp depicting Gladiators fighting. ” One of my favorites ”

The lamps used a wick made from fibers such as linin or papyrus, that was inserted into the body of the lamp. The end of the wick rested in the nozzle. The oil was poured into the lamp through the filling hole on top of its body. The wick was lit and a small flame was emitted from the tip of the wick resting in the nozzle. The lamp could be set on any flat surface but was also portable and could be carried in a persons hand. They could also rest on a special stand.

Aside from their basic functional use for indoor and outdoor illumination, lamps also served other purposes. They were buried in tombs and graves along with pottery, jewelry and other symbolic gifts. They could also be dedicated as votive offerings to the gods and goddesses in temples and sanctuaries.

Lamps were made using a two-part mold. Wet clay was pressed into each half of the mold and then the two halves were joined together. They were allowed to dry slightly, and then the molds were removed and the oil-hole and wick-hole were pierced  by hand. Finally the lamp was fired in a kiln for up to two days.The lamps could be decorated with almost any scene, from divinities  to animals to abstract decoration.

On the lamps base was usually the ” makers mark ” which was a symbol or name indicating the specific workshop that created the lamp. This can be very useful for archaeologists ,because  it can sometimes tell us where and when the lamp was made. 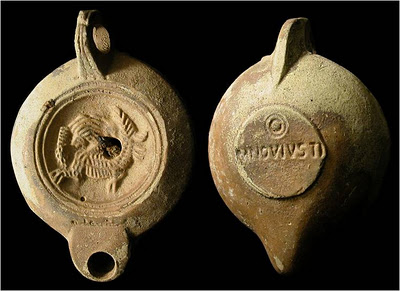 Roman oil lamps with makers mark on the base.

Roman Oil lamp. Most likely used by the poor.

Most Plebs  ( poor people) lived in apartments such as these. some were behind or above shops. All the family lived together. Their grandparents ,parents  and children. These apartments were noisy and dirty from the rooms being filled with smoke coming from the kitchen while cooking. You can imagine what little light there was in these homes.

Posted by ritaroberts on May 14, 2014 in Uncategorized

The moment we’ve all been waiting for. This is it! Ideologogram = Ideogram + Supersyllabogram: our First Concrete Example = (chariot) halter:

Posted by ritaroberts on May 9, 2014 in Uncategorized

One Small leap for Syllabograms, One Giant Leap for Linear B: the Last Stage before Liftoff! Thomas G. Palaima’s Translation of Linear B Tablet FL 1994

My teacher Richard Vallance has made a unique discovery with the Linear B Ancient Scripts and we are very excited about it. This re-blog explains.

Posted by ritaroberts on May 8, 2014 in Uncategorized

This is beautiful . So I thought my blogging friends would enjoy it too

Burundians love their country, and here is Steve Sogo’s song, ‘My Beautiful Country, Burundi,’ which celebrates this fact. The song has been a run-away hit, very much beloved throughout the country.

Scenes in the video are of traditional Burundi styles and musical instruments and of various famous spots in the country, including the little pyramid and small trickle of water out of which Steve sips, which is claimed to be the southern-most source of the Nile River.

The scenes by Lake Tanganyika were shot here, where I live. The piece has become a classic.

Posted by ritaroberts on May 6, 2014 in Uncategorized

Mysteries and Burials at Chaco Canyon

Posted by ritaroberts on May 1, 2014 in Uncategorized