RSS
← The Beauty of Antique Beadwork.
Preserving The Past. →

Keeping Warm during the 17th-19th Century

It is on a cold winters night that there is nothing like climbing into a warm cosy bed previously heated by today’s modern centraly heated houses,or electric blanket, or even hot water bottles. But not so for our ancestors. Not only were there. no adequate windows in the medieval residences of England,the strong winds created draughts strong enough to blow out candles while being carried from room to room.The first sign of the approaching winter weather when frosts did not help keep beds from becoming damp and severely cold, was daunting to say the least for our ancestors. However, by the time of Elizabeth l , the problem had been solved and the warming pan was heartily welcomed.

The metal pan was hinged and could be filled with glowing embers or coals, the pan when placed between the sheets could be moved around the bed by the handle attached to the pan. We know from records that Queen Elizabeth’s warmer was made of gold,decorated with small diamonds and rubies. Unfortunately there are no pictures for us to see but sounds exquisite and priceless if it ever came up for auction. 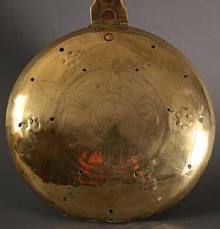 For todays collectors the problem is there are “as always” plenty of reproductions around and have a convincingly “aged ” look about them so it can be a little difficult to tell the original from the fake…But don’t despair as there are give-away things to look for.

Firstly knowing the history of shape and style in warming pans and the second is knowing your metals.The earliest examples date from the Mid 16th to around 17th century. solid cast and turned iron or steel handles,the lids of solid brass with deep pans. I feel sorry for the poor servants who had to carry them. Live coals were used at this stage and because of this holes had to be pierced into the lids of the pans so that the coals did not go out when the lids were closed. The lids on these early pans are beautifully engraved and pierced by the metalworker sometimes working the coats-of-arms for a specific family for whom the pan was intended. These elaborately designed bedwarmers were of course for the rich mans pocket.

By around 1700 there were plenty of plain warming-pans on the market aimed at the less wealthy so could be bought quite cheaply for around three shillings. The earlier examples were too heavy with their solid wrought-and cast iron handles and by the 18th century wooden handles were introduced conveying expert turnery in beach,oak and other local woods. Technical advances had also improved the production of English copper which meant there was little danger of its cracking or faulting in use. 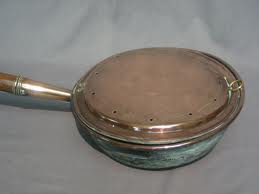 Now that the new copper with its rich glowing finish,had swept into popularity decoration was minimum and as the pan was now to hold embers instead of live coals the lid could now be solid ,piercing was not necessary. It is these warming- pans  that were most popular from the first quarter of the 18th century through to the mid 19th century and highly collectable.Over the years the copper appears to have mellowed to a rich glowing colour and the handles have that beautiful patina aquired through years of careful polishing. The earlier 18th century models are much heavier and the pan deeper,but from then on were much lighter also, because embers were being used instead of coals the pans became much shallower. 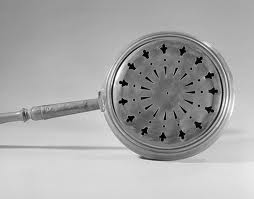 If you have a sharp eye for telling the difference between an old warming-pan and new, you may spot a bargain.Look for the colour differences between old and new…..Any piece of old copper has a much pinker,glowing tinge to it,and much smoother-looking finish than modern metal,and the wood no matter how well it may be stained,cannot achieve that rich deep sheen which comes from constant polishing through the centuries. But of course the most obvious clue to telling whether or not a warming- pan is original is the fact that,it was used to serve a purpose,therfore it will inevitably show signs of wear and tear. There are usually signs of small fractures around the hinge or on the shank where the metal pan is fixed to the handle.

The handle itself will show a pattern of uneven shades where parts would be worn more than others through frequent use. And finaly is the metal thick enough to carry the embers safely ?.If the answer is no,then you have a reproduction. However there are some really nice reproduction warming-pans to be had. But for me, it would have to be the real thing.

This is a Victorian Warming Pan Handle but you can see how the patina has built up during this much later period.

Posted by ritaroberts on August 11, 2012 in Uncategorized

← The Beauty of Antique Beadwork.
Preserving The Past. →

5 responses to “Keeping Warm during the 17th-19th Century”