When in England I walked Offa’s Dyke many times as it was very near to where I lived, so I was surprised at the recent news stating that archaeologists have uncovered evidence which suggests that Offa’s Dyke may have been built up to 200 years earlier than previously thought. Samples from Clwyd-Powys Archaeological Trust excavations on a stretch of the dyke have been radiocarbon dated to the second half of the sixth century .Historians have always associated the dyke with King Offa who ruled the kingdom of Mercia in the eighth century. But now archaeologists believe it might have been in use before he ruled. The trust explains it was a tremendously exciting discovery”. The excavations were taken from a section of the protected ancient monument at Chirk near the Shropshire border. 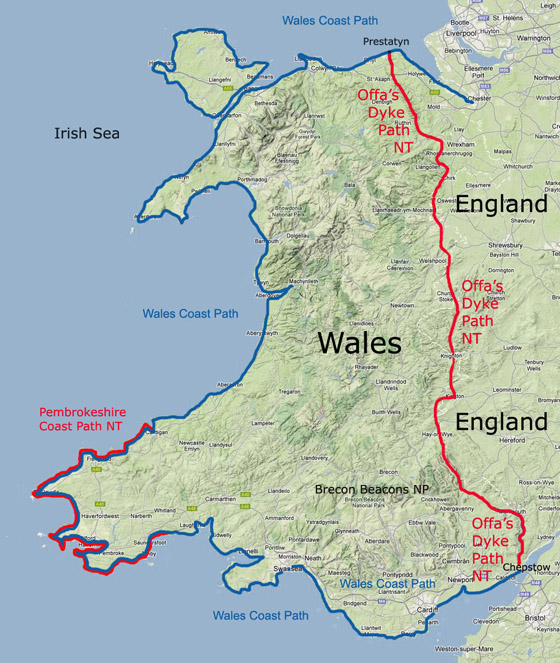 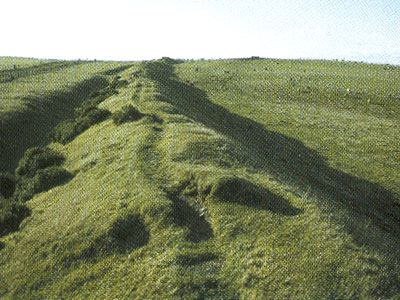 to where I lived.

Along the Dyke in the surrounding Forests.

It had been believed that the linear earthwork stretching l77 miles (285km) was built by King Offa of Mercia during his reign between 757 and 796. However there has been no firm archaeological evidence to support this.But now the trust claim that accurate scientific dates have been obtained from Offa’s dyke for the first time. The trust said that the dated material came from an ancient layer of re-deposited turf underneath the bank suggesting that this material was laid down as part of the construction process.

The importance of this tremendously exciting discovery means that we must re-think some of our assumption about this monument”, said Paul Belford, the trust director, ” Certainly the dyke was built to make a statement about the power of the kingdom of Mercia”. Carbon dating tests revealed a 95 percent probability that the Chirk section of the dyke had been built between 480 and 652 It is now likely that parts of the dyke system was in place before Offa’s time but it is also likely that he would have consolidated the existing network into what we now call Offa’s Dyke”, said Mr Belford. It is now clear that it was not the work of a single ruler but a long term project that began at an earlier stage in the development of the kingdom. Offa’s Dyke is the longest linear earthwork in the U.K., and one of the longest in Europe. The modern border between England and Wales closely follows much of the route of the dyke. Of course these samples are only from one section of the dyke and further work is needed on other parts of this enigmatic monument before anyone can say who built it and why.

Posted by ritaroberts on April 29, 2014 in Uncategorized